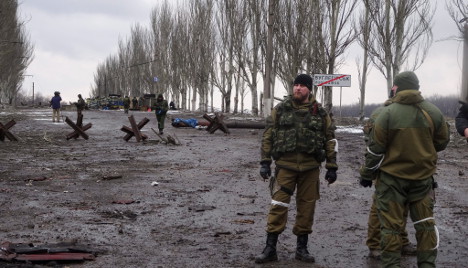 The trio spoke by phone about the situation in Debaltseve, a town and important railway junction where around 8,000 Ukrainian government troops are surrounded by rebel forces.

Government spokesman Steffen Seibert said on Tuesday that the leaders had agreed “concrete steps” for observers from the Organization for Security and Co-operation in Europe (OSCE) to enter the area, although he did not provide any further details of what had been finalized.

A Kremlin statement said only that they "talked about the role of the OSCE monitoring mission", along with the "problems with the ceasefire" and the Debaltseve situation.

Each side at Debaltseve accuses the other of breaching the terms of a ceasefire, agreed last week in Minsk at an all-night summit meeting, which was supposed to come into force at midnight on Sunday.

The Minsk peace plan also calls for heavy weapons to be removed from combat zones on Tuesday, two days after the ceasefire came into effect.

Rebels and government forces have two weeks to move the weapons out of areas where there has been fighting.