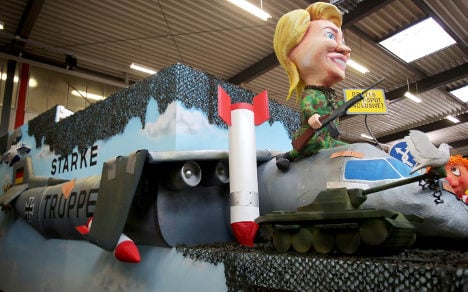 It's one way of sweeping your adversaries from the battlefield, a ministry spokesman in Berlin acknowledged while fielding the umpteenth media inquiry about the incident.

And it was true that a black-painted broomstick was observed on a vehicle of a German convoy in Nato's new rapid response force, he told The Local.

But the armoured car was a mobile HQ and was not required to carry a real mounted weapon during the September exercises.

It was also true that much of the German force that participated did not have adequate weaponry: according to media reports, 41 percent of the soldiers lacked pistols they would carry in a genuine rapid deployment situation; and 31 percent of the MG3 general-purpose machine-guns were absent.

But this reflected the general short supply of equipment in Germany's armed forces, which was no secret and was addressed by rotation of certain hardware among units in a "very dynamic way" when required, according to the ministry.

Like other contributors to Nato's Response Force, German troops would have 30 days to amply arm and equip themselves for any deployment, it stressed.

The troops sent to Norway were part of a test phase for a new faster reaction 'spearhead' the 28-member military alliance decided to form last autumn. It will comprise at least 4,000 Nato troops and will be able to deploy in 48 hours.

The German command had fully equipped its segment of the new force two weeks ago, the spokesman added.

Regarding the now famed black-painted broomstick, "Why the soldiers still simulated a weapons system is professionally incomprehensible", he said.