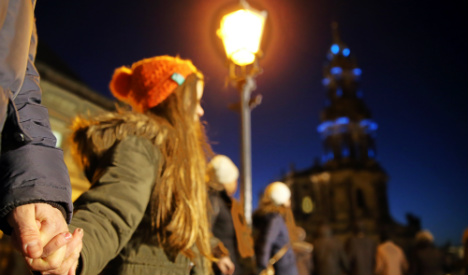 "We know who started the murderous war," the head of state said in a remembrance church service. "And that's why we will never forget the victims of German aggression, even as we remember the German victims today."

The eastern city of Dresden — dubbed the "Florence on the Elbe" river for its Baroque architecture — has become a symbol of the wholesale destruction of WWII, as has its British post-war partner city of Coventry.

In a campaign that started on February 13, 1945, British and US planes bombed Dresden with conventional and incendiary explosives, causing a firestorm that killed up to 25,000 people and wiped out the historic city centre.

Gauck spoke in Dresden's emblematic 18th-century Church of Our Lady, which was reduced to a rubble heap that long served as a war memorial. It was rebuilt after Germany's 1990 reunification and reconsecrated a decade ago.

Some critics in Germany and abroad have argued the raids on mostly civilian targets were unjustified as Hitler's Germany was already effectively defeated — but Gauck cautioned against revisionism, especially voiced by extremist groups.

The president, a former pastor and civil rights activist in communist East Germany, said the falsification of history had begun during the Nazi regime, continued in East Germany, "and is even now continued by the most incorrigible".

"A country that perpetrated the monstrosity of genocide could not expect to emerge with impunity and undamaged from the war that it had started," he said.

Neo-Nazi groups have claimed far higher death tolls in Dresden in the past. On previous anniversaries they rallied through the city in "funeral marches", where they have been confronted by anti-fascist and pacifist activists forming human chains.

The right-wing demonstrations have dwindled, and only around 500 people joined last year's event, while no event was held this year.

Thousands of people, including Gauck, city officials and religious leaders, meanwhile formed a human circle around the old city as church bells rang.

Dresden has made international headlines recently as the birthplace of xenophobic and anti-Islamic marches that started last October and peaked at 25,000 in January, days after the Charlie Hebdo attacks in Paris.

Gauck did not mention the far-right PEGIDA, short for "Patriotic Europeans Against the Islamization of the Occident", which appears to have imploded in recent weeks following large counter protests, internal strife and scandal.

Dresden Mayor Helma Orosz has said that Friday's commemorations would be an opportunity to demonstrate the city's core values of "openness to the world and tolerance".

Gauck stressed the importance of joint remembrance with those who suffered under Nazi Germany's aggression, welcoming guests from Britain, Poland, Russia and other countries in the church.

"We remember all the victims who at that time lost their lives to violence and war, not only in Dresden, but also in other places," said Gauck, also listing Belgrade, Rotterdam, London and other cities.

Among the guests at the ceremony were Britain's Duke of Kent and Archbishop of Canterbury, as well as British ambassador Simon McDonald.

"We will remember today all the victims who died in Dresden 70 years ago and all those who died in Coventry and many other cities as the awful cost of defeating Nazi tyranny," said McDonald in a statement.

He recalled that Coventry "was the first major city to be attacked from the air" and targeted by Germany's Luftwaffe more than 40 times between 1940 and 1942.

"By remembering these events — and telling the younger generation what happened then — we can help to ensure that such terrible things are never repeated," he said.

"It is also right that we should show our solidarity with those who survived such horrific nights in cities like Dresden and Coventry."