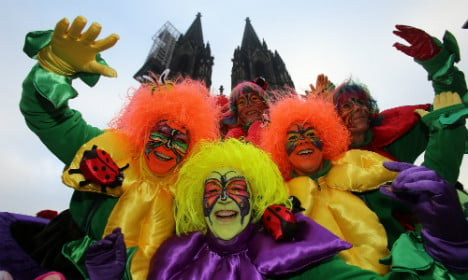 To Karneval revellers in Cologne, one says Alaaf! Photo: DPA

The Berlin Wall came and went, but Germany is far from united. A deep divide runs through the heart of this nation, between those who go mental at carnival and those who can’t stand it.

In Berlin, men heading to work in suits and ties arrived with their clothes intact on Thursday. In Cologne and across the Rhineland, it was a very different story, for Thursday is Weiberfastnacht, Old Wives’ Day, when men are quite literally assaulted by women, often drunk, who symbolically castrate them by cutting their ties off with scissors.

On Weiberfastnacht, the predominantly Catholic south and west of the country embarks on a week-long beer and Schnapps-fuelled fancy dress binge that makes the Munich Oktoberfest look like a tea party, while the Protestant north shakes its head.

Helped by sunny weather, which is predicted to last throughout the weekend, carnival got off to a glorious start on Thursday.

Thousands of costumed revellers, known as “Jecken” or “Narren” (Fools) packed the Alter Markt square in Cologne to watch the “Dreigestirn,” (Triumvirate) of prince, farmer and virgin (a man in a wig), officially launch the carnival season.

In towns across the Rhineland and all the way down to the Swiss story, people took to the streets and got partying. It’s a refreshing sight. For six days, the locals abandon their Teutonic reserve and walk around dressed as clowns or Friesian cows. Strangers talk to each other.

The neat streets descend into chaos. Bus drivers, bank clerks and supermarket cashiers wear red noses or funny wigs. Town halls are besieged by carnival troupes who take control of local authorities for what they call the "Fifth Season".

For these magical six days, parts of Germany are transformed. For one week in 52, humour is positively encouraged – even a social necessity all of a sudden.

Stand-up comedians dust off their repertoires and address packed ballrooms in regional dialects. Orchestras provide helpful fanfares to mark the end of jokes.

Carnival has various origins, stemming from the Roman tradition of celebrating the start of spring and ancient Germanic fertility rites. Christians adopted the traditions as a way to usher in the fasting period before Easter.

It’s also seen as an opportunity to poke fun at the authorities, as reflected in satirical floats at the big carnival processions. Some Rhineland carnival societies have colourful 19th-century military outfits that were designed to poke fun at the French and the Prussian authorities who at various points in history had the audacity to ban carnival out of fear that the revellers might be plotting sedition behind their masks.

The highpoint of carnival is Rose Monday, when millions flock to the big processions in Cologne, Düsseldorf and Mainz and countless smaller ones. Cologne and Düsseldorf are known for their satirical floats.

Here are a few helpful tips for the uninitiated: The Carnival Purists of Rottweil

While the Rhinelanders are busy getting drunk and Schunkling, the people of Rottweil in the Black Forest polish age-old wooden masks for their “Narrensprung” (“Fools’ Leap”) procession, an altogether more serious and strictly regulated affair.

Rottweil is a bastion of traditional carnival, called Schwäbisch Alemannische Fastnacht in the southwest of Germany, where it has a more medieval and sinister feel, with grotesquely-masked witches scaring children and some adults.

The Rottweilers are purists. On Rose Monday, a marching band trumpets its way through the town from five o'clock in the morning to wake up the townsfolk for the main event.

The procession starts at eight o'clock when around 4,000 Fools start filing down into town through Rottweil's medieval Black Gate. They wear costumes that have been handed down through the generations.

It’s a slow, shuffling dance. The Fools hop from one leg to another to the tune of the "Fools' March" which is played over and over and over again. They let out high-pitched calls of "Hu Hu Hu!" interspersed with weird, guttural purring sounds. Why? Not many people can remember. The customs have evolved over centuries.

There are only seven different types of masks, each representing a separate Fastnacht character. They include the Federahannes, which has large teeth curving out of its mouth and a costume covered in goose feathers.

The Federahannes carries a long pole with which he vaults across the cobblestones, and the pole has a heavily perfumed calf's tail attached to it which he dangles in people's faces while growling and purring.

The Rottweil festival is famous throughout Germany and it's undeniably spectacular.

But if you want to have fun, head to the Rhineland. The party ends on Ash Wednesday, the start of Lent, when rubbish men sweep the last shards of broken glass and discarded wigs off the cobblestones, Germany gets back to normal and the Jecken sing their last mournful song: "On Ash Wednesday, Everything is Over."

David Crossland is a freelance journalist based in Berlin.