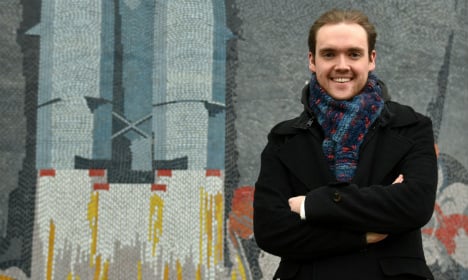 Newiak, 26, currently drives a tram and gives dance lessons to finance his student life. But in ten years time he plans on leaving Earth for good as a pioneer Mars settler for the independently funded Netherlands-based "Mars One" project.

"This is an immense chance to build up a completely new human community on an alien world," says Newiak, who will find out on Monday if he has made it to the next round of selection for the practical tests.

Six crews with four astronauts in each will then start an eight-years training programme in the autumn. After the planned launch of the first team in 2024, the rest will follow at intervals of two years. No return flights are planned, however, due to the technical complexity and the cost.

In the coming years, unmanned flights will first transport equipment, vehicles and habitation modules to Mars to create a stable living environment ahead of the crew arrivals.

By most definitions, Mars is no idyllic destination. Temperatures on the planet vary between minus 125 and plus 35 degrees Celsius, while the surface is swept by 400 km/h storms. Add the knowledge that there is no way back, and most people would turn tail immediately.

But the prospect of having to live out his life more than 200 million kilometres from his home planet doesn't daunt Newiak, whose view of the mission is somewhat utopian.

"That's the least significant point for me, we will have a comfortable existence on the station. Many people here on Earth live in far worse conditions." He expects to lead a life without class or social barriers among the first human settlers. "A new life, without money, everything managed jointly, everyone receiving only as much as they need."

And he is far from alone in his attraction to the proposal. Since Mars One first advertised the mission in August 2013 it received 200,000 applications from around the world.

But space exploration veterans regard the venture with great scepticism. The head of the European Space Agency's manned flight programme, German astronaut Thomas Reiter, said he would not send any crew on a mission without the possibility of returning.

The project was both questionable for an ethical standpoint and was "technically shoddy", Reiter said.

Experts also warn of the radiation that the crews will be exposed to on their nine-month journey to the nearest planet to ours, since adequate protection against the rays over long periods has not yet been developed.

Another former German astronaut, Ernst Messerschmid, described the participants of such a mission as a "suicide squad".

But Newiak pays no heed to the naysayers.

"You only need to look around you to realise what advancements there have been in recent years," he said.  "There are enough serious scientists who regard all these problems as resolvable."

The flights will also generate huge media and public interest – they have to, because that is how the six-billion-dollar (€5.2bn) project is being financed. Not only will the launches be broadcast live, but also the training of the crews.  Viewers will even be able to vote which crew flies first.

Mars One already has a partnership with the Netherlands TV production company Endemol, and the remainder of the funds are to be raised through sponsorship deals and selling broadcasting rights.

For now it is still a dream for the applicants. While determined to clear every selection stage, Newiak is content doing his masters degree and volunteer first-aid work, driving his tram and teaching couples to dance before they wed.

Until his big day comes.

"At first my family and friends were extremely disturbed by my plan," he says. "But they know that I am fascinated by science and that if I make the final round they won't be able to talk me out of it anyway."