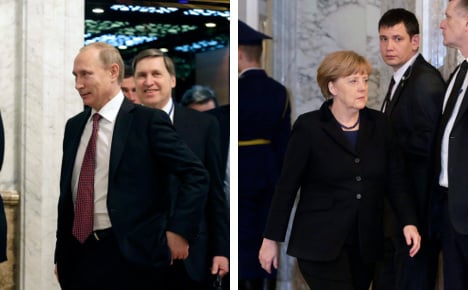 The statement released on Thursday morning said that Merkel, President Vladimir Putin of Russia, President Petro Poroschenko of Ukraine and President Francois Hollande of France "reaffirm their full respect for the sovereignty and territorial integrity of Ukraine."

The leaders believe "there is no alternative to an exclusively peaceful settlement", it went on, and are "fully committed to undertake all possible individual and joint measures to this end."

President Putin of Russia had earlier been the first to tell journalists that the leaders had finally reached a ceasefire agreement for eastern Ukraine.

He told reporters in the Belarusian capital Minsk that following an "agreement on the essential points" after 17 hours of negotiations, the ceasefire would come into effect at midnight on Sunday February 15th.

The news was confirmed by German government spokesman Steffen Seibert, who wrote on Twitter "After 17 hours the negotiations in Minsk are finished. Ceasefire from February 15th at midnight, then withdrawal of heavy weapons. There is hope here."

Speaking to reporters in Minsk, Merkel spoke of a glimmer of hope.

But she added that she had "no illusions" about the deal's solidity and that "big hurdles" remained, before leaving immediately for a European Council summit in Brussels.

Meanwhile, Foreign Minister Frank-Walter Steinmeier confirmed that the deal was not a "comprehensive solution" nor a "breakthrough", saying that he welcomed it "without any exuberance".

#Steinmeier: Agreement is not a breakthrough, but could be a step from a spiral of military escalation towards political momentum. #Minsk

But he added that important progress had been made – "for the first time, we have clear specifications of times for the implementaton of the Minsk Accords" – the previous agreement between the warring parties reached in September.

And French president Francois Hollande called the agreement "a relief for Europe and hope for Ukraine".

The terms of the agreement will include the withdrawal of heavy weapons from the battle zone by both sides and humanitarian assistance being allowed in.

But Putin claimed there had been sticking points when the Kiev government refused to speak directly with the separatist rebels in Donetsk and Lugansk in eastern Ukraine.

And rebel leaders had complained to him of "aggression" from government forces encircled in the town of Debaltseve.

Putin said that part of the ceasefire would be the creation of a safe-passage corridor to allow those troops to leave.

He called on all sides to stop the bloodshed and allow the political process to take its course.

News agencies had reported early on Thursday morning that the leaders of pro-Russian Ukrainian rebels had refused to sign the ceasefire agreement hammered out overnight by the four leaders.

Poroschenko had earlier called several Russian demands "unacceptable" following the all-night talks, saying that he could deliver "no good news" to journalists.