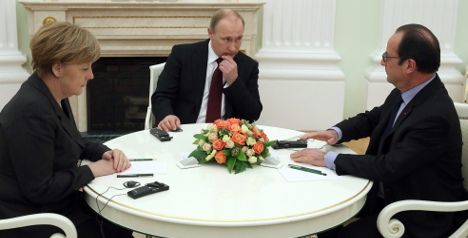 Merkel, Hollande, Putin and Ukrainian President Petro Poroschenko are meeting in the Belarusian capital, with the European leaders hoping they can revive a ceasefire agreement signed there just six months ago in September 2014.

In Washington earlier this week, Merkel said the conflict in Ukraine was a threat to the “peaceful order of Europe” established since the end of the Cold War.

The pro-Russian Ukrainian rebels – generally accepted to be backed with supplies, arms, and even disguised troops sent by Moscow – have laid claim to a large swath of territory in the east of the country, abutting the Russian border.

More than 5,400 people have died over the past year in battles between separatist and government forces.

News of a pause in fighting in eastern Ukraine on Tuesday night appeared premature, with a spokesman for the rebel forces telling dpa that it was “too soon to speak of a ceasefire”.

“The important thing is to stop the fighting”, Nicu Popescu, senior analyst at the European Union Institute for Security Studies told The Local. “The previous ceasefire didn't really work so achieving another one, a sustainable one, is a tough enough goal.

“If they manage it then it will give diplomacy time to work and then there's a chance of finding some long term fix.”

Merkel has become the de-facto lead negotiator for Europe, in part because of her privileged relationship with Putin.

Born in the former East Germany, the chancellor learned Russian at school, while Putin was posted in Dresden as a young KGB officer and himself speaks German.

Merkel has had the most regular telephone contact with Putin of any Western leader.

More importantly, Germany stands at the centre of the fractious Western coalition supporting the pro-European government in the Ukrainian capital Kiev.

“Germany has managed to knit together the cracks, although there are countries that tend to be friendlier to Russia,” Gustav Gressel, visiting fellow at the European Council on Foreign Relations (ECFR) in Berlin told The Local.

He pointed out Greece, Cyprus, Austria, Hungary and Italy as EU members which are less than enthusiastic about a showdown with Putin, for both political and economic reasons.

Germany has its own reasons for trying to defuse the conflict as, along with France, it has significant economic ties to both Russia and Ukraine. But Merkel has managed to find a middle ground between the foot-draggers and the Baltic states, Scandinavia and Poland, who feel more directly threatened by Russia's probing westwards and want a tougher response.

“Germany is trying to find a common European position. She wants to avoid an impression of European indecisiveness”, said Gressel.

And the fact that France – which might formerly have counted among the nations less ready to confront Russia – will be at the table is an important signal.

“Hollande and Merkel are speaking for Europe”, Popescu said. “They may be the French and German heads of state but they are representing Europe.”

SEE ALSO: Ukraine: Hollande has 'will' but is there a way?

That's why Merkel was so insistent about the threat to Europe as a whole during her press conference with US President Barack Obama on Monday.

Hammering home the threat to the “principle of territorial integrity” which has held for Europe in so long is one way to make reluctant nations sit up and take notice.

All eyes on Washington

However well Merkel's intra-EU diplomacy works, however, there's a chance that Putin may not be in a listening mood.

“Russia is always looking at America and how Washington is behaving,” Gressel said.

“That's one reason why [Putin] has agreed to take part in these talks, to gain time while he finds out what America will do.”

There was news last night that Obama had telephoned Putin to warn the Russian leader there would be “costs” if he continued supporting “aggresive acts” in eastern Ukraine.

He directly accused Putin of sending troops, weapons and financial support to the separatists. The US government has kept open the possibility that they could in turn send weapons to arm pro-government forces in a bid to put pressure on the Russians.

But not everyone was convinced that just sending weapons would allow the embattled forces commanded from Kiev to push back the rebels.

“Arming Ukraine will not mean Ukraine will win a war against Russia”, Philippe Migault, director of research at the Paris-based Institute for International and Strategic Relations (IRIS) told The Local.

“The Ukrainian army is not motivated, disciplined or united… they may have more troops and more arms than the separatists but they have no chance of winning.” Beyond sending arms, though, there is no question of western troops being sent to fight the rebels in Ukraine – for all Hollande's talk of “war” earlier this week.

“When Hollande talks of war, we are obviously not talking about Nato troops on the ground”, Popescu said.

Migault suggested that a worsening of the conflict could mean that fighting would spread across all of Ukraine.

“If we see a big defeat for the Ukrainian army, the crisis will simply spread to other parts of the country and Ukraine will go the same way as Yugoslavia.”

If the negotiations in Minsk today don't lead to some kind of ceasefire, it's unlikely that the conflict will escalate into a direct face-off between Nato and Russia.

But even with western arms deliveries, the Kiev government is set to run out of money in just a few months, as a temporary agreement with Russia over gas supplies comes to an end.

And Russia is unlikely to blink before then, despite western sanctions hitting its economy.

“With Iran it took years before they were really, honestly ready to negotiate [after sanctions were imposed],” Gressel pointed out.

“Russia is better internationally networked, has more money and a larger military than Iran – it could take even longer.

“The Ukrainian crisis needs to be resolved in some way, at least in terms of an end to the fighting, in a shorter timespan than sanctions will allow us to do.” Merkel, Hollande and Poroschenko will be well aware of this as they sit down with Putin on Wednesday– and will know that the man across the table is thinking the same thing.

Putin's best interest is to drag out the conflict for as long as possible, and he appears for now to have the will and the means to do it.

“We will end up in a sort of proxy war”, Jonathan Eyal, the international director of the Royal United Services Institute in London told CNN.

“A semi-permanent stalemate is the most likely outcome. It could last for years to come.”