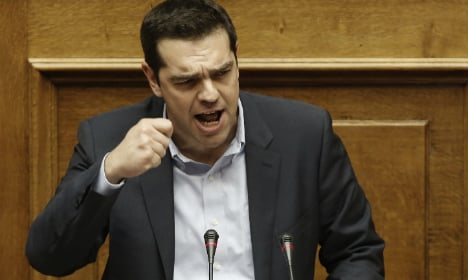 On the eve of an extraordinary meeting of eurozone foreign ministers in Brussels, he said his country would not request a bailout extension despite pressure from German Finance Minister Wolfgang Schäuble.

"I want to repeat today, no matter how much Schäuble asks it, we are not going to ask to extend the bailout."

Speaking just hours before Greece unveils its proposal for a new reform deal to its creditors, Tsipras said Schaeuble was making "irrational" suggestions and accused him of trying to make the situation worse.

"Schäuble is proposing irrational things, to ask for a perpetuation of the mistake", he said, referring to the stringent 2010 EU-IMF bailout deal that his government insists left Greece in the financial mire.

Earlier Tuesday Schäuble had told reporters in Istanbul that "it's over" if Greece doesn't want the final tranche of its multi-billion euro aid programme on the current terms, according to Bloomberg.

And European Economic Affairs Commissioner Pierre Moscovici said the existing bailout deal was "the anchor" on which discussions should be held.

Tsipras, who is set to have his first face-to-face meeting with Chancellor Angela Merkel at an EU summit on Thursday, warned the European paymaster against bullying Greece.

"We respect the special economic and political weight of certain peers who are the steam engine, like Germany."

However, "those betting on might and conflict will understand that they are making a tragic mistake. They do not wound the weak, they wound themselves and Europe," he said.