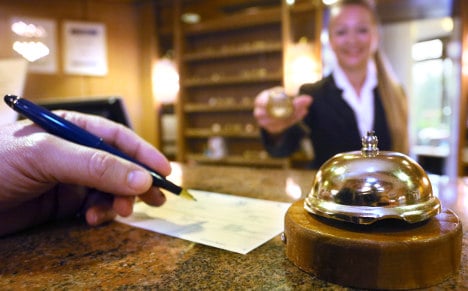 The number of foreign tourists who trekked to Europe's biggest economy last year rose by 5.0 percent to 75.5 million, the federal statistics office Destatis said in a statement. It was the fifth annual record in a row.

Overnight stays by German tourists in hotels, bed and breakfast and camp sites also increased by 3 percent to 348.5 million. That pushed the overall total including both German and foreign tourists to 424 million overnight stays, up three percent.

Germany has steadily increased its advertising of its tourism potential. More than €28 million of budget funds were allocated to the National Tourist Board for this purpose in 2014.
GALLERY: Germany's 10 most surreal landmarks
But whereas some countries tend to overglamourize themselves with flowery slogans, Germany has generally preferred a more understated approach, opting simply for 'Germany – The travel destination'.
As for the most popular sites visited, the outright winner over the years is Bavaria's Neuschwanstein Castle, a folly built by King Ludwig II in the 19th century and immortalized in movies like Chitty Chitty Bang Bang (1968). Not so picturesque but infinitely more adrenaline-charged is the number two favourite attraction, the Europa  theme park near Freiburg, according to a list of top 100 sites compiled by the Ministry of Economic Development.
The Berlin Wall surprisingly only scores fifth place, after Cologne Cathedral and the Medieval town of Rothenburg.
SEE ALSO: 'Disney' castle staff on trial for fraud