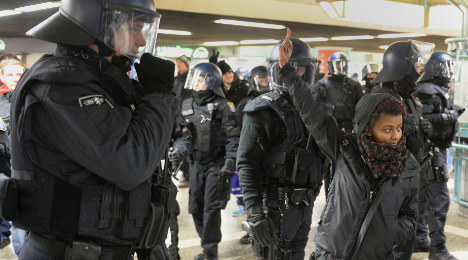 A woman gestures at Pegida demonstrators on the other side of police lines in Frankfurt main train station. Photo: DPA

Only 2,000 people gathered outside the Frauenkirche in Pegida's former stronghold of Dresden on Monday night, police said – a massive drop compared with the 17,000 who assembled on January 25th.

The wind has gone out of the movement's sails since the departure of much of its leadership in recent weeks.

Founder Lutz Bachmann announced he was stepping down after photos emerged of him styled as Hitler, along with allegations of racist online comments.

And former spokeswoman Kathrin Oertel's attempt to form her own group fell flat at a demonstration on Sunday.

Meanwhile, Focus reported that a small demonstration of fewer than 100 members of "Dügida" – the Düsseldorf branch of Pegida – led to investigations of two people for Nazi activities.

One is accused of having given the Hitler salute, while the other sang the banned "Horst-Wessel-Lied", the Nazi party anthem.

Police told the magazine that they believed this week's demonstration was almost completely made up of far-right extremists.

Several hundred people gathered in the city for five counter-demonstrations, with some trying to break through police barriers and attack the Dügida march. Leipzig-based offshoot Legida was forbidden from demonstrating by the police – although the authorities allowed several counter-demos to go ahead.

When Legida members began meeting anyway, police officers broke up the gathering and accompanied the demonstrators back to the main station.

Officers had to hold them back with truncheons and pepper spray, although no-one was hurt.