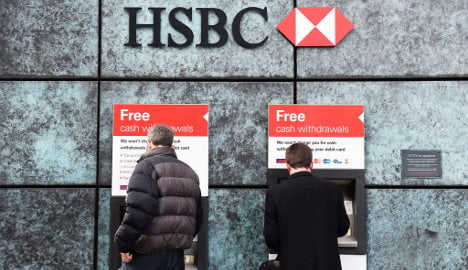 The Süddeutsche Zeitung reported on Monday that around one-third of the German customers used anonymized numbered accounts, while around 200 used shell companies to do business with the bank.

Germans had a total of around €3.3 billion stashed away in HSBC's vaults, with the average deposit standing at more than €1.5 million.

But data published on the website of the International Consortium of Investigative Journalists (ICIJ) showed that the largest client at the bank had assets of around €1.75 billion.

Investigators have already checked through 1,136 of the clients unveiled by the leaks, but French authorities are believed to have almost 1,000 more names of people with links to Germany.

When they first checked the files, French investigators found that only six of the 3,000 accounts held by their citizens were reported to the tax authorities – a situation likely to be repeated in Germany.

While there are legitimate uses for Swiss bank accounts, the files have shown that many clients used the bank to stash money out of reach of the taxman, travelling to Switzerland to make cash withdrawals rather than make potentially traceable money transfers to their home countries.

Among the bank's worldwide clients were alleged weapons dealers, traders in blood diamonds and people close to Al-Qaeda.

Information about the bank's clients was passed to French authorities in 2008 by Hervé Falciani, a former IT worker at HSBC turned whistleblower.

He initially handed the bank details to French Finance Minister Christine Lagarde, meaning that it has often been referred to as the "Lagarde List".

But over 140 journalists from Le Monde, The Guardian, Süddeutsche Zeitung, ICIJ, and German broadcasters NDR and WDR have had access to the files since September 2014.

"The Swiss private bank of HSBC began a radical transformation in 2008, to protect its services from being exploited for tax avoidance or money laundering," HSBC Swiss branch boss Franco Morra said in a statement on Monday.

He added that 70 percent of the bank's accounts had been closed during this process, with none remaining open for American citizens since 2010.

By current estimates, more than €1 billion in taxes and fines could be collected in the twelve countries which currently have access to the files.