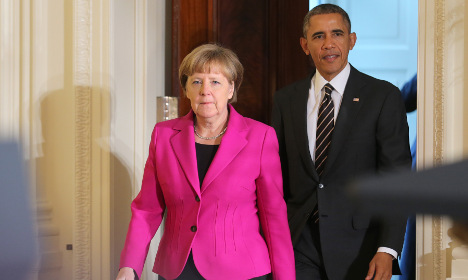 "For somebody who comes from Europe, I can only say, if we give up this principle of territorial integrity, we will not be able to maintain the peaceful order of Europe," Merkel told a joint press conference with US President Barack Obama. "It's essential."

Obama said he had made no decision on whether to send weapons to Ukraine to help Kiev battle pro-Russian separatists, as he warned the West would not allow Russia to redraw Europe's borders by force.

The US commander-in-chief, who has faced increasing calls from domestic critics to supply the outmatched Ukrainian army with more weapons to shore up its faltering defenses, said he was still mulling his options.

"The possibility of lethal defense is one of those options that's being examined. But I have not made a decision about that yet," Obama told journalists in Washington.

Merkel and many European nations believe weapons would not overturn the military mismatch between Ukraine and pro-Russian forces backed by Moscow, and would simply escalate a conflict that has left 5,400 people dead in less than a year.

A summit of leaders of Ukraine, Germany, France and Russia is tentatively planned for later this week, after Merkel leaves Washington.

Obama meanwhile warned that the West could not allow Russia to rewrite Europe's borders "at the barrel of a gun".

"We continue to encourage a diplomatic resolution to this issue," Obama said.

"And as diplomatic efforts continue this week, we're in absolute agreement that the 21st century cannot stand idle, have us stand idle and simply allow the borders of Europe to be redrawn at the barrel of a gun."