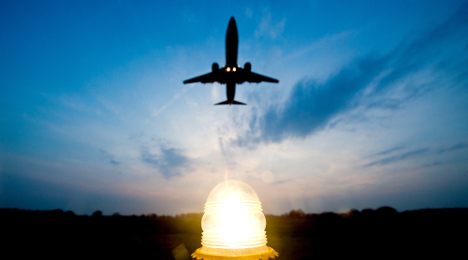 The plane, which had taken off in Krakow, Poland, was forced to divert from its route to Shannon in Ireland and land at Berlin's Schönefeld airport around 11:45 pm on Monday, the federal police said.

The pilot had diverted to Berlin at around 11:25 after the 33-year-old man made repeated threats to the crew that he had a bomb.

Once safely on the ground, the plane was stopped on a taxiway at a distance from the airport buildings and other aircraft.

Federal police took the supposed bomber prisoner and found that he had a blood alcohol level of 2.8 parts per thousand – more than five times the limit for driving in Germany.

But his unfortunate fellow passengers still had to leave the plane with their hand luggage and wait in the terminal while the cargo hold was unloaded by police searching for bombs.

After nothing was found, the passengers queued up to pass security checks again before being allowed back on board at around 3:45 am.

Police kept the threatening drunk in custody to sober up until midday, and said that he would be prosecuted for breach of the peace by threatening a crime.

The case echoed a similar one at Tegel airport last week, when a man joked that he had a bomb while queueing for security checks.

He was refused permission to board the US-bound plane and had to stay in Berlin – along with his long-suffering girlfriend.