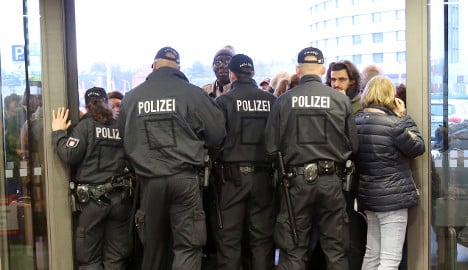 Police hold passengers back at the entrance to Hamburg airport on Monday morning. Photo: DPA

Police turned away passengers arriving at Hamburg airport early on Monday morning as the airport was overwhelmed with people trying to check in and get through security.

"The latest situation is catastrophic. We're over capacity," an airport spokeswoman told dpa at around 8 am.

But when contacted by The Local two hours later, a spokeswoman said that they had brought the situation under control.

"We were just overwhelmed and had to close the doors for about half an hour, to give ourselves a buffer," she said.

"Now waiting times at security are back down again".

Hanover, Hamburg and Stuttgart deal with approximately 80,000 passengers every day.

The strike at Hamburg began on Monday at midnight, and is planned to last the whole day, causing serious delays to security checks.

Airport officials said that around 40,000 passengers' flights would be affected, with a total of more than 100 arrivals and departures cancelled.

They asked passengers to check with their airline before leaving for the airport.

At Hanover, there were minor delays after security personnel walked off the job early on Monday morning, although no flights were cancelled. And Stuttgart passengers were told to arrive around three hours in advance by an airport spokesman.

Union Verdi has called members out on strike over negotiations with employers for increases of between 70 cents and €2.50 per hour in different states.

"We hope that the employers' federation understands that they have to come with us to the negotiating table," Verdi Hanover spokeswoman Ute Gottschaar said on Monday Morning.

Employers and unions will next meet for talks on Wednesday in Hamburg.

"We hope that the strike sends a strong enough signal that we can reach agreement at the negotiations on Wednesday," Verdi spokesman Peter Bremme said on Monday.