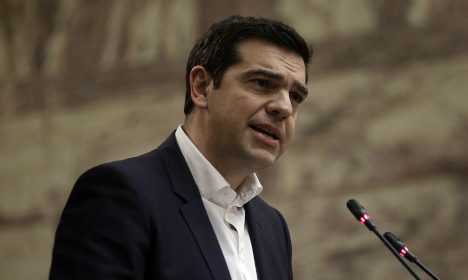 But he is likely to run up against a firm "no" from Europe's biggest economy, which argues that Berlin does not owe it a cent and that the historic issue has long been closed.

"Nearly 70 years after the end of World War II, the question of reparations has lost legitimacy," a German finance ministry spokesman said recently.

The issue of wartime reparation claims over Germany's four-year occupation of Greece, which ruined the country financially and left thousands dead, has complicated relations between Athens and Berlin for decades.

Now, with Greece struggling under more than €300 billion ($340 billion) of debt, calculations that Athens is still owed just over half that amount, or €162 billion left over from the war, is sure to touch a nerve.

Tsipras's Syriza party and its unlikely coalition partner, the nationalist Independent Greeks party led by Panos Kammenos, plan to re-open the claim, whose impact is highly symbolic in Germany for harking back to its darkest chapter.

Haunted by its Nazi past, Germany prides itself on its efforts to come to terms with its history.

Tspiras, a former Communist, lost no time after his election victory in laying flowers at a memorial near Athens where dozens of Greek leftists were executed by German occupation troops in 1944.

His finance minister, Yanis Varoufakis, during a bruising first visit last week to Germany, stressed that it had not been "a sign towards Germany" but rather was targeted against Greece's neo-Nazi Golden Dawn party, now the country's third-biggest political force.

During his election campaign, Tsipras said he would press the "unfulfilled right" to reparations for a "people who bled and paid heavily for the brutality of Nazism".

Greece's occupation by the Nazis from 1941 was one of the most bloody in Europe, with Hitler's forces rampaging, pillaging and shooting, and encountering a nation that fiercely resisted.

The Nazi regime ended up bleeding Greece dry. The Third Reich forced the Greek central bank to loan it 476 million Reichsmarks which has never been reimbursed.

A German Bundestag lower house of parliament report in 2012 put the value of the loan at $8.25 billion.

In Greece, its estimated value is higher, at €11 billion, according to a confidential report to the finance ministry and reported by the To Vima newspaper in January.

After Germany's capitulation and the end of the war, the United States' main concern was to halt any advance by the communists in Greece's civil war.

It asked the Greek government, keen for economic support under the Marshall Plan — the US aid package to rebuild Europe after World War II — to drop its reparation claims until the signing of a peace treaty.

Germany rebuilt itself and paid practically nothing to its former enemies "which obviously helped the German economic miracle hugely" in the post-war period, according to an analysis by Rabobank.

Albrecht Ritschl, a professor of economic history, said in an interview with Germany's Spiegel news weekly in 2011 that "Germany has been the 20th century's worst payer of debts".

Just before German reunification in 1990, the two former German states signed a treaty with the Allies, considered as the formal end of World War II.

Although the document, which was approved by Greece among others, was not officially termed a peace treaty, for Berlin it effectively drew a line under possible future claims for war reparations.

Not so, though, for former resistance icon Manolis Glezos, who has been pressing for Germany to settle up for decades.

The issue has a "political and moral dimension", says the nonagenarian who, at the age of 18, took down the Nazi flag from atop the Acropolis.

And last year, Greek President Karolos Papoulias, another veteran of the Greek resistance, took the opportunity during a visit by his German counterpart Joachim Gauck to call for negotiations on the issue to be opened quickly.

"You know that I can't give you any other response than to say that the legal path is closed," Gauck said, before solemnly asking Greece to forgive Germany for a heinous Nazi crime committed at the height of the war.