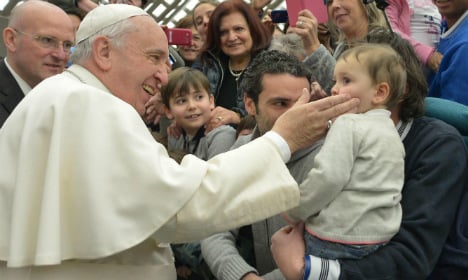 In a general audience dedicated to the role of fathers, the Pontiff said a good father is one who can forgive and disciplines with firmness while not discouraging the child.

"One time, I heard a father in a meeting with a married couples say 'I sometimes have to smack my children a bit, but never in the face as to not humiliate them'," said Pope Francis.

"How beautiful. He knows the sense of dignity! He has to punish them but does it justly and move on," he added.

In an interview with N-24 broadcaster, head of the DKSB said that the Pope's words were incredibly damaging.

"He is a world leader with a global audience," said Paula Honkanen-Schoberth. "It damages children's rights around the world."

In Germany, a child's right to live free from physical violence has been enshrined in law since 2000.

Manuela Schwesig added her own ire to the comments from the Holy See.

"There is no 'dignified' hitting of children," tweeted the Minister of Families, Women and Children on Friday. "There should be no misunderstanding: Any violence against children is unacceptable."

The Catholic Church, in a follow-up statement, said the Pope was not advocating for beating children, but for "helping someone to grow and mature."

But Honkanen-Schoberth said that a smack is the wrong way to do that.

"We cannot hit adults as adults and it is even more important that we, as adults, as parents, do not hit children," she said, adding that it is better that parents walk away from a situation if they feel their tensions rising when faced with a strong-willed child.

The German Bishops Conference simply said "We don't speak for the pope."

Politicians have also chimed in.

"Completely out of touch: the Pope says a 'smack' for children is okay. Everyday violence against children cannot be seen as harmless!" tweeted Simone Peter.