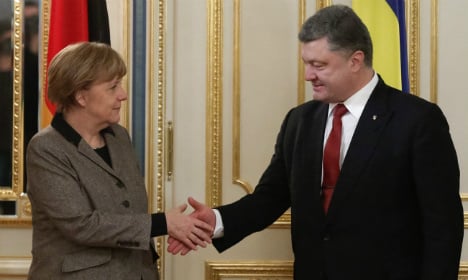 Talks between Poroshenko and his German and French counterparts – who unexpectedly jetted into Kiev on Thursday with the new peace proposal – "give hope for a ceasefire", the Ukrainian presidency said in a statement.

There was no joint declaration by the three leaders after their talks and few details have emerged about the Franco-German diplomatic initiative.

Speaking in Paris before heading to Kiev, Hollande said he and Merkel would "propose a new solution to the conflict based on the territorial integrity of Ukraine".

Munich-based Süddeutsche Zeitung said the proposal calls for "an immediate ceasefire" and offers greater autonomy for the separatists in eastern Ukraine, across a larger area than envisaged in a ceasefire deal agreed in Minsk in September last year.

The two European leaders want to make clear to Poroshenko that this could be "the last chance" to avoid a military defeat and economic collapse, while Putin will be warned of the possibility of more sanctions, the paper added.

A spokesman for the German government dismissed the information in the article as "not accurate".