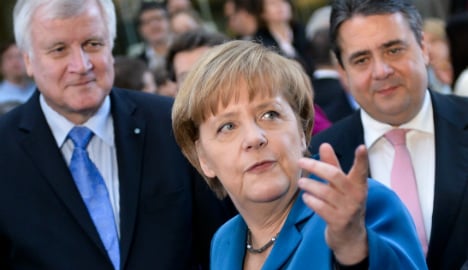 Between brokering a Ukrainian ceasefire and sparring with a fledgling anti-austerity Greek government, the current German government has found approval with its citizens.

The poll commissioned by Die Welt newspaper and ARD's Tagesthemen programme shows that 57 percent of Germans are either "very happy" or "happy" with the job the "Grand Coalition" between Angela Merkel's Christian Democratic Union (CDU) and the Social Democratic Party (SPD).

Those surveyed who voted for Die Linke (The Left) or the Alternative for Germany (AfD) were least likely to be satisfied with the red-black government, but even among  Green Party voters, more (50 percent) said they were content than discontent (45 percent).

If a snap election were to be called over the weekend, 41 percent of survey respondents said they would vote CDU while the SPD would capture 25 percent of the vote, its loss of a single point to Die Linke being the only change since the last time.

The biggest mover in the ranking was Interior Minister Thomas de Maizière, who saw a 12 point jump in his approval rating, making him fourth-favourite among respondents. Minister of Economic Affairs and Vice-Chancellor Sigmar Gabriel also saw an eight point boost in his approval.

Germany's least favourite politician, the AfD's Bernd Lucke, also saw a two point boost in approval, but still only had 12 percent of people say they thought he was doing well. Around two thirds of respondents said they were dissatisfied with his work, while the rest had no opinion.

Bavarian sister party to the CDU, the Christian Social Union (CSU), saw Transportation Minister Alexander Dobrindt, best known for his determination to implement tolls on German motorways, had 62 percent of respondents say they were dissatisfied with his work.

Ahead of next weekend's vote in the Hamburg state parliament, the poll also showed the SPD claiming an easy victory with 46 percent of the vote and another attempt at a Green Party-CDU coalition unlikely as those parties take 18 and 11 percent of the votes combined.

Respondents also gave hope to the ailing Free Democratic Party, giving them a chance to make it into the state parliament with 5.5 percent of the vote. The AfD has the same chance, says the poll.