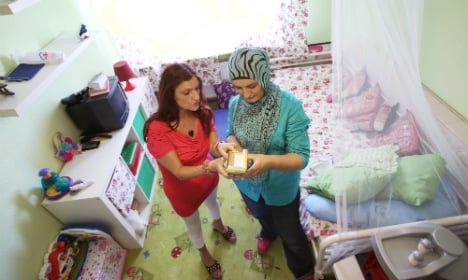 In an interview with Bild, Robert Feiger, who represents IG Bau in parliament, says that to solve Germany's housing problem, pensioners have to make way for families, but the state should help.

"Many seniors in their old age are sitting tight in their old flats, and, as a result, many families have to put up with flats that are much too small. We have to resolve this bad state of affairs," Feiger said.

IG Bau is a trade union that represents the construction and engineering sectors, as well as gardening, forestry and agriculture.

Feiger also said that this support should only be offered to pensioners willing to move out of their larger flats and not force people from their homes.

"Lots of people at a certain age, perhaps even when they are widowed, find themselves in a flat too big, and here the state has to help," he said.

Other social groups welcomed the idea, but said there were other issues standing in the way of freeing up space for growing German families.

"It's a good idea," president of pensioners' interests group VdK Ulrike Mascher told Bild, but it means that there should also be a promise of "affordable flats in the same neighbourhood" for the pensioners to move into.

Another head of a pensioners group, the SoVD, said that there was concern seniors would feel pressured to move out.

"No one should feel pressured to leave their home," said Adolf Bauer, while adding that it might be a good idea in individual cases.