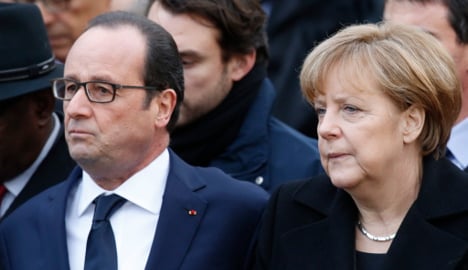 Francois Hollande and Angela Merkel in Paris at the march for the victims of the January terrorist attacks there. Photo: DPA

"Ukraine is at war. Heavy weapons are being used and civilians are being killed daily," Hollande told journalists during his semi-annual press conference.

He noted that a volley of sanctions against Russia had failed to "stop hostilities" and said he and Merkel had come up with a new initiative in a bid to stem fighting between Kiev and separatist rebels in eastern Ukraine.

"We will propose a new solution to the conflict based on the territorial integrity of Ukraine. We will discuss it with President (Petro) Poroshenko today and on Friday in Moscow with the Russian president," Hollande said.

Moscow denies allegations by Ukraine and its Western allies that it is sending thousands of regular army troops and weapons to support the rebels.

The fighting has claimed more than 5,358 lives since April, including some 220 in just the past three weeks, according to the United Nations.