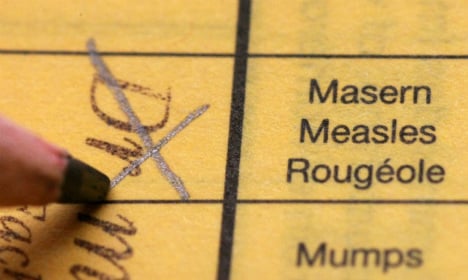 The Robert Koch Institute (RKI) is reporting that in Berlin alone, there have been 375 people infected with measles since the beginning of an outbreak in October, dampening the federal government's goal to have the disease eradicated by the end of this year.

Germany had signed on to the WHO's pledge to eliminate the disease by 2015, but that doesn't look possible, says the RKI.

In January alone, there were 254 confirmed cases of measles in Berlin, reported the health institute. More than 100 of those patients landed in hospital.

Around 90 percent of 335 patients who were asked were never immunised against the disease.

Half of those diagnosed are adults.

"Overall, the vaccination rate is still too low," said Annette Seidler, acting director of the preventative immunisations department at RKI.

The RKI says that two of every 1,000 measles patients will die from complications from the disease. So far, no one has succumbed in the Berlin outbreak.

Germany had hoped that no more than 82 cases of measles would be diagnosed in Germany this year in order to be on track to eradicate the disease. However, the number of new cases in Berlin are nearly three times that.

"The outbreak in Berlin is a major setback," said Seidler.

However, the Berlin outbreak isn't to be likened to the current flux of measles cases moving through the U.S. where an outbreak originated at California's Disneyland theme park and has since spread to six states.

There, immunisation rates have fallen to below 92 percent, the threshold needed for herd immunity, when enough people are vaccinated to stop a disease from spreading. In Germany, more than 95 percent of people have the Measles, Mumps and Rubella (MMR) vaccination, well over that mark.

In Berlin, the origin of the outbreak comes from a group of refugees from Bosnia and Herzogvina as well as Serbia. More than half of the new cases in Berlin stem from people in this community.

During the Yugoslavian civil war of the 1990s, routine immunisations were not carried out, leaving people vulnerable to the disease.

Older people coming down with measles include people from those countries born in the early 1970s, where there was another immunisation gap because the state recommended only one dose of the measles, mumps and rubella (MMR) vaccine instead of two.

Measles is considered one of the most contagious diseases as it is airborne and people carry the disease for four days without showing symptoms, potentially spreading it to 18 other people in a community without immunisation.

"Measles should by no means be taken lightly either by adults or by children," Seidler said, adding that adults are often struck harder by the disease than children.

Two years ago, a school in south-western Cologne was shut down by an outbreak of measles. A study conducted by polling firm Forsa after that found that 95 percent of Germans were in favour of mandatory vaccinations.

Seidler said that more parents moved to get vaccinated after that, but parents tend to neglect themselves. Like those currently suffering from the disease, many people born in the early 1970s are also missing the vital second shot.

"This is a call to action to catch up on the vaccine now," said Seidler. "The virus doesn't care when or where you meet. It's like playing Russian roulette."

SEE ALSO: Gates calls on world to preapare for next Ebola