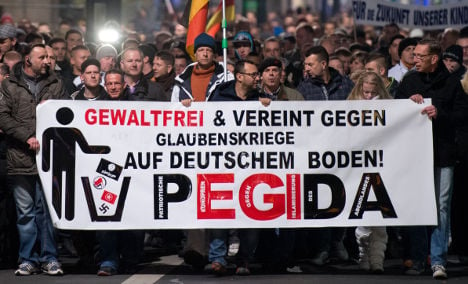 Political scientist Werner J. Patzelt, who led the study, said that most of the demonstrators were simply citizens unhappy with politics, political parties and the media when presenting his findings.

The unrepresentative study was based on observations of the Pegida demonstrations since November and on interviews with 242 participants.

He found “dissatisfaction among citizens with their political class and with left-leaning discourse”, with Dresden being a particular hotspot in the former East Germany, where such feelings are stronger.

Many of those dissatisfied with mainstream politics hope that right-wing populist party AfD will come to represent their views. Favourable circumstances in Dresden led to “this volcanic eruption of the magma of dissatisfaction”, Patzelt said.

But Patzelt argues that “dissatisfaction with a process of immgration felt to be 'uncontrolled'”, mixed with hostility to foreigners and to Islam, was the “crystallisation point” for their indignation.

While two thirds among the demonstrators thought Germany should continue to receive asylum seekers and war refugees, the same number thought the country was accepting too many asylum seekers, saying many might be lying about facing persecution in their home countries.

And the less people felt themselves represented by establishment politics, the less open they were to asylum seekers and war refugees, or to the suggestion that “an Islam as peaceful as modern Christianity” could fit into Germany.

Around three quarters of demonstrators each said they were “German patriots” and “Europeans” – although the two did not necessarily go together.

Those describing themselves as “European” were more open to accepting asylum seekers and refugees, and to Islam having a place in Germany.

After a wave of resignations gutted the organization's leadership, Pegida has announced its next demonstration for Monday February 9th.