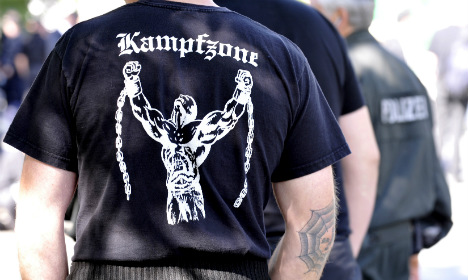 A participant in a march of right-wing extremists in Dortmund. Photo: DPA

Sebastian Weiermann is a freelance journalist in Dortmund who, on Monday evening, was sent a death notice with his own name on it.

"It was sent to me via Twitter on Monday night," Weiermann told The Local on Wednesday. He said it was sent directly to him from a neo-Nazi account that was shut down soon after.

The death notice was mocked up to look like one of the kind found in German papers, bore Weiermann's name and read "In love and gratitude, we will happily soon say goodbye."

But the neo-Nazis had added their own slogan, "National Restistance Now!", under the funerary message. Another death notice for another journalist read "In our hearts, you will not live on under any circumstances."

Weiermann told The Local that he often writes about the neo-Nazi events, including the occasional editorial where he writes "that they are simply, sometimes, dumb".

'I'll still go out there'

However, despite the eerie tweet, the freelancer who writes for taz, Tagesspiegel and the Rurbarone, doesn't worry for his life.

"When you're covering their events, as a journalist, they throw insults at you and take your picture and other things, but this is the first personal threat I've received, but no, I'm not worried. I'll still go out there," he said.

Dortmund police spokesperson Oliver Peiler told The Local that five people, who all work as journalists or in the field of journalism, had received the death notices on Monday, but it was not the first case of this kind that police in North Rhine-Westphalia are investigating.

All five people are receiving some measure of security, he added, even if police don't think that these threats are just threats and no bodily harm will come to those named in them.

Peiler said that late last year, other people who had spoken out against Dortmund's growing number of right-extremists had also received similar threats over social media, though no one has been charged in the case.

"These are all people who are journalists who have written about or against Dortmund's right-extremists scene," he said, adding that they are investigating the missives as death threats.

All the notifications closed with an advertisement, saying "GERMANS (sic) buy at antisem.it", an online store that sells neo-Nazi t-shirts, stickers, propaganda and music.

On Twitter, the shop issued a statement, saying "Even if it's needless to say: The Antisem advertising on the threats made against journalists is not from us, of course."

Weiermann said that the people who own the shop are smarter than that.

"Of course, they don't do it themselves, but that doesn't mean they don't discourage their customers from doing it on their behalf," he said.

"This is probably a single neo-Nazi looking to make a name for himself amongst his peers," Weiermann added.

The neo-Nazi scene in Dortmund is a growing problem, said Peiler.

"Through support for Pegida, (right-wing extremists) seem to be becoming more bold and more aggressive," he said, noting that police have seen an increase in neo-Nazi activity in recent months.

Antisem.it is run by law student Michael Brück, who also founded "The Right", a local neo-Nazi political party in 2012. Last year, they claimed one percent of the votes in the municipal election with more than 2,100 votes. In the same vote, the National Democratic Party (the NPD) claimed less than one percent of the electoral vote with their 1,827.

It's so strong that even Dortmund's most recent turn on Tatort, the cult crime-investigation television programme that airs Sunday nights, looked at rising neo-Nazi groups in the Dorstfeld district.

Weiermann said that despite their rise in numbers, the threats are most likely acts of frustration.

"They've had a few campaigns that haven't gone well, and I as well as the others, wrote about it and they're annoyed that that's what is out there," Weieremann said.