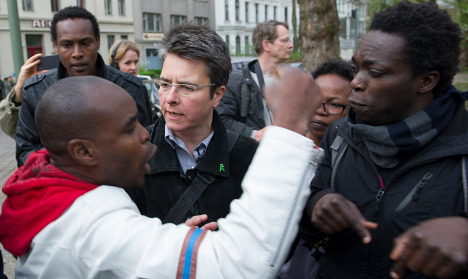 Monika Herrmann attempts to mediate in a refugee dispute in 2014. Photo: DPA

The mayor of the capital's eastern Friedrichshain-Kreuzberg district, Monika Herrmann, has deemed it "tactically shrewder" to temporarily take over unused private apartments than set up temporary accommodation in places like school sports halls, the Berliner Morgenpost reported.

Herrmann, who is no stranger to controversial proposals, later said that she had merely requested the city Senate to check the legality of such a move. She then added that the mulled accomodation of asylum seekers in commandeered properties would only be for a few months at a time

"That won't really hurt anyone," added the mayor, who briefed colleagues from other Berlin districts last week on her brainwave.

The mayor justified her plan by saying the pressure to accommodate refugees was subjecting the social services to unsustainable pressure.

She cited the example of school sports halls being used to accommodate refugees, although she said no sports activities for pupils had yet been cancelled as a result.

However, city senator for justice Thomas Heilmann slammed the apartment idea as unworkable and said the mayor had "not thought it through".

Home owners subjected to such measures would inevitably take the matter to court, Heilmann said, warning against meddling with "basic rights".

The city is currently struggling to house a growing number of asylum seekers while their cases are being reviewed.

According to the newspaper, last year almost 1,300 applicants were accommodated in apartments provided by the administration, further squeezing the housing sector, where lack of available apartments has been forcing up rents.

Around 9,000 refugees are currently living in apartments provided by the city, with another 14,000 in hostels, community centres and other temporary premises.

More than 1,000 more refugees arrived in Berlin in January, according to press reports. Many are from the conflict zones in Syria and Iraq, which is fuelling resentment at the perceived Islamisation of Germany among a growing section of the population.

Demonstrations by the protest movement Pegida ("Patriotic Europeans Against the Islamisation of the West") since October have drawn thousands onto the streets in a number of cities, both for and against the group.

Support in Berlin has so far been muted, due in part to the once-divided city's tradition of tolerance for minorities and immigrants.

As the weekly rallies continue, attendance in Dresden, the heart of the movement, hit a peak attendance of 25,000 two weeks ago following the Charlie Hebdo massacre in Paris.

Support for Pegida then took a hit when its founder and leader Lutz Bachmann stepped down on January 21st after a photo of him with a Hitler-style haircut and moustache appeared on Facebook, along with racist slurs.

But 17,000 people still turned out for the weekly rally in Dresden on Sunday.