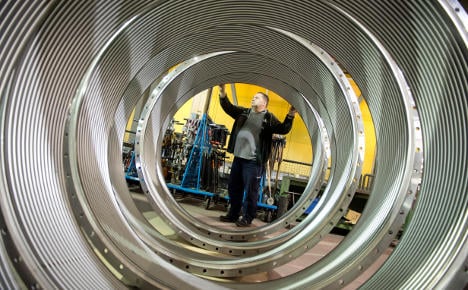 A worker checks compensators in a Baden-Württemberg factory. Photo: DPA

Nevertheless, it was too early to predict the impact on German confidence of the elections in Greece, where the victory of a radical left anti-austerity party could reignite concerns of a euro break-up, analysts cautioned.

The Ifo institute's closely watched business climate index rose to 106.7 in January month from 105.5 points in December, the think tank said in a statement.

It was the third monthly rise in a row and was slightly higher than analysts' expectations.

"Companies were far more satisfied with their current business situation and the majority were also optimistic about the business outlook," said Ifo president Hans-Werner Sinn.

"The German economy has gotten off to a good start to the year."

The sub-index measuring current business rose to 111.7 points, the highest level since July 2014, and the outlook sub-index increased by 0.7 point to 102.0 points, the institute said.

Nevertheless, the survey was conducted before the Greek elections, and the victory of the anti-austerity party Syriza there could soon begin to sour the recovery prospects once again, analysts warned.

"Substantial market turbulence or long, drawn-out discussions about the risk of a so-called 'Grexit' (Greek exit from the euro) could dampen sentiment again in the coming months," said BayernLB economist Stefan Kipar.

"It remains to be seen what effect the outcome of the Greek elections will have."

"That supports our short-term caution for Germany's economy until the Greek risk is resolved one way or another."

"There are several fundamental factors that support Germany's economic recovery, after it has lost speed in the course of 2014," he said.

"For 2015, Germany – and the eurozone – surely can lock in a positive growth stimulus from the massive drop in oil prices, a lower euro exchange rate and substantial monetary loosening by the European Central Bank," he said.

"This indicates a promising start to the new year. We currently expect the German economy to grow by 0.2 percent quarter-on-quarter in the first quarter," he said.

Capital Economics economist Jennifer McKeown said the renewed rise in the Ifo index "suggests that fears about the effect of the Greek crisis on the German economy have so far been offset by the perceived benefits of a weaker euro and ECB quantitative easing."

"The signs of a recovery in the making have become even stronger and more unambiguous," he said, pointing to the lower oil price, the depreciating euro and a brisk US economy.

"For the first quarter of 2015, we expect a growth acceleration to plus 0.4 percent quarter-on-quarter. And we're sticking to our growth forecast of 1.4 percent for this year as a whole.”