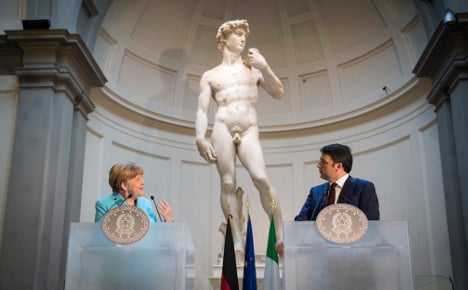 "At the heart of our principles lies solidarity. I want Greece, despite the difficulties, to remain part of our story," Merkel said during a press conference in Florence with Italian Prime Minister Matteo Renzi.

Renzi, 40, said he was "not worried about the results of the Greek election. I respect the citizens' choice and from next week the 27 (EU) partners will work with" whoever wins "with great willingness."

The election — the second in three years — comes with Greece still locked in talks with its EU-IMF creditors for a 7.2-billion-euro tranche of bailout loans the state needs to stay afloat.

After a six-year recession in which the national output shrank by a quarter, Greeks are being called on to determine whether to stick with spending cuts demanded by their international creditors, or demand a new deal on the country's huge debts.

Syriza, which has a steady lead in opinion polls over conservative New Democracy — the party formerly in government — wants to redraft the EU-IMF bailout which it says has brought nothing but misery for the past five years.

The party's campaign has sparked concern among officials in the European Union, the European Central Bank and the International Monetary Fund, with IMF chief Christine Lagarde on Monday warning that to renegotiate debt carried "consequences" for the countries attempting it.