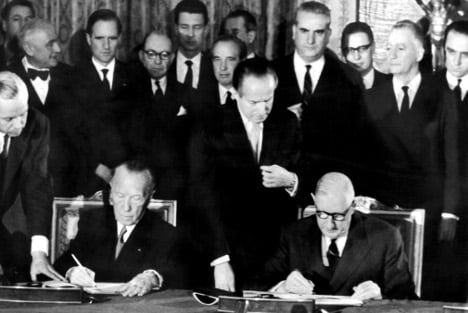 The treaty signed on January 22, 1963, 18 years after the end of the Second World War, was the centrepiece of the two leaders' vision for a strong and united Europe, and an essential step towards building the European Union as it is now.

The Élysée Treaty stipulated that German and French government representatives should meet at regular intervals, and that "the two governments will consult each other, prior to any decision, on all important questions of foreign policy“.

Enshrined in the treaty was also close cooperation in culture and youth policy. This decision led to the creation of the Franco-German Youth Office 30 years later.

Groundbreaking as the deal was, the road to the treaty's signing was by no means smooth and unencumbered.

Fearing that closer ties with France would mean Germany would have to distance itself from it's transatlantic ally, the United States, the Bundestag (German parliament) added a preamble in the treaty that affirmed German-US relations.

This in turn incensed de Gaulle, who himself whose foreign policy towards the US was decidedly colder than Germany's. De Gaulle was also staunchly against allowing US ally Britain into the European Economic Community (EEC), in contrast to Adenauer.

But both men were spurred by their vision of a strong partnership between two countries that would establish Europe as force in international foreign policy.

The treaty was eventually signed in the Élysée Palace, prompting one of the most typically German-French exchanges in history.

De Gaulle, with his trademark flair for oration, said "my heart overflows and my soul is grateful that I have signed this treaty with the chancellor.

"No-one on this planet can fail to appreciate the immense importance of this act.

"It not only turns the page on a long and bloody era of fighting and war, but also opens the door to a new future for Germany, for France, for Europe and therefore for the world!"

To this Adenauer responded, "General, you have spoken so eloquently that I cannot add anything to your words."

The treaty has been a cornerstone of joint European decision-making over the last decades, holding firm even at periods where German-French relations have not been at their absolute best.

During the height of the Eurocrisis, for example, the two countries failed to see eye-to-eye on ways out of the Eurozone's financial woes – Germany famously held on to cutting goverment spending and wages, while France favoured collectivising part of the Eurozone's debt.

Now that its own economic woes have seen France fall behind Germany, many have asked themselves what the future of Franco-German relations hold, as the two countries find themselves on unequal footing.

Personality clashes have also contributed to cooler relations between the historic partners, as Chancellor Angela Merkel has less in common with Socialist President Francois Hollande than his centre-right predecessor Nicolas Sarkozy.

Last month, Merkel said in an interview reforms undertaken by France and Italy to fix their public finances were "insufficient".

But the treaty – as it has for more than fifty years  – will always be remembered as an auspicious moment in the countries' shared history, sealed with the embrace of the two men who signed it.