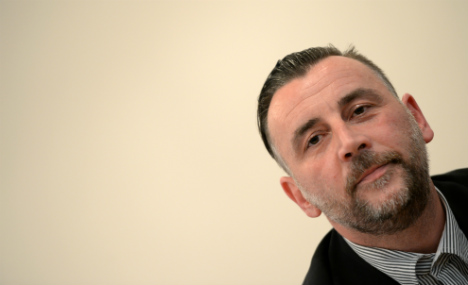 The picture from earlier this year, showing Lutz Bachmann with his hair gelled to the side and a toothbrush moustache just like the Nazi leader's, was submitted to the Dresdener Morgenpost (MoPo) tabloid by an anonymous source.

The MoPo also revealed that in comments captured by the paper's anonymous source, Bachmann, 41, referred to immigrants an asylum seekers as "cattle", "trash" and "brutes".

Bachmann has emerged as the defacto leader of the Dresden's weekly marches organised by Pegida, which stands for "Patriotic Europeans against the Islamisation of the West". The marches invoke the populist Monday Demonstrations that started in Leipzig in 1989 that became the social movement behind the dissolution of East Germany.

The social media postings all stem from September 2014, a month before the first Pegida march assembled on the streets of Dresden.

Bachmann has dismissed the photo as nothing more than "a joke".

He also updated his Facebook profile picture of a still of Charlie Chaplin as "The Great Dictator", which satirises Hitler, with the caption: "He's allowed to do Satire… not Lutz."

On Bild's Facebook page, Bachmann said "I published the photo in response to the satirical novel "He's Back" and posted it to Christoph Maria Herbst's wall".

Herbst was the voice of the audio book for the novel "Er ist wieder da", written by Timur Vermes. The novel tells the tale of Hitler as he wakes up 66 years after his supposed death and takes a stroll through Berlin's Mitte neighbourhood.

The MoPo said that all posts were deleted after they contacted Bachmann regarding the posts.

But another post from 2012 showed a picture of a man in the white-hooded robe of the Ku Klux Klan (KKK) with the words "Three K's a day keeps the minorities away".

The source, who wished to remain anonymous, said that Bachmann blocked her from his profile after she argued against his political views.

"He spoke in a derogatory manner about other people who didn't agree with his ideas," the source said.

Pegida founders have long fought against the idea that their group is made up of right-wing extremists.

Their habit of calling the press "Lügenpresse" or the "lying press" stems from the way German journalists have reported on its association with right-wing groups like Hooligans Against Salafists.

The movement has also taken pains to distance itself from the National Democratic Party (NPD), Germany's neo-nazi political party.

In an interview with blu-news published on January 11th, organisers Kathrin Oertel and René Jahn said their group was made up of people who voted for the Christian Democrats (CDU), the Free Democratic Party (FDP) and euro-sceptic upstart Alternative for Germany (AfD), "But no one among us votes for the NPD," said emerging spokeswoman Oertel.

While their movement does attract right-wing extremists both online and at their demonstrations, it has been a long-maintained  position from the organizers that they aren't responsible for who shows up.

Bachmann last made headlines on Monday when the weekly Pegida march was cancelled after authorities said there was a "credible" jihadist threat on the organiser's life.

"We will not be silenced," he and Oertel said at a press conference held that day.

Bachmann is currently under police protection following the threats.