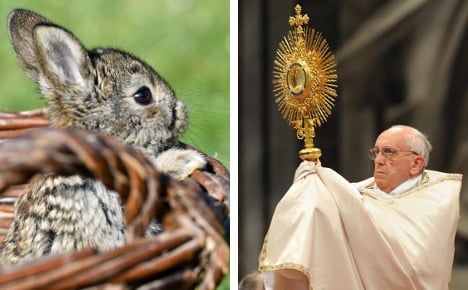 "He should really think harder about giving up expressions like that and allow people to use contraception instead," ZDRK president Erwin Leowsky said.

"I think it would be much more appropriate than saying such stupid things".

Leowsky added that not all rabbits had a high level of sexual activity, and that the stereotype mostly applied to rabbits living in the wild.

Most rabbits bred in captivity have a well-regulated reproductive rate, he said.

Pope Francis made his remarks on the way home from a visit to the Philippines, a stronghold of the Catholic Church in Asia which last year passed a family planning law in defiance of the Vatican's 1968-vintage ban on contraception.

"God gave us the means to be responsible", he told journalists on the flight home.

"Some think, and excuse the term, that to be good Catholics, they must breed like rabbits".

Following the Church's teachings did not mean "Christians should have children one after the other", he said.