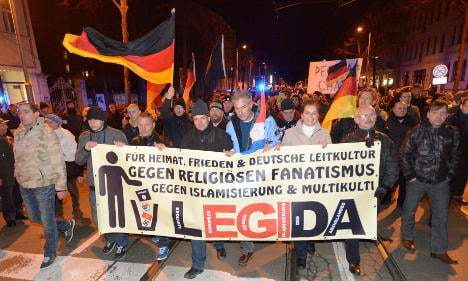 Up to 4,000 police officers recruited from all over the country are preparing for the protests, in one of the biggest deployments in Leipzig since German reunification – compared to 1,600 officers in Dresden for Pegida's last protest with 25,000 people.

Saxony's Interior Secretary Michel Wilhelm said on Tuesday that no protest ban was envisaged for Legida.

“A concrete threat, such as the one in Dresden, does not exist in Leipzig,” he said. The Dresden ban came into effect on Monday after Pegida founder Lütz Bachmann received murder threats from jihadi terror group Isis,

Wilhelm said around 19 counter-demonstrations to Legida's have been registered.

So far, Pegida has not been able to gather significant numbers to rally its cause, only a few thousand had come out in support over the group across Germany. This lay in contrast with the 45,000 people who demonstrated against Pegida and for an open and tolerant society across at least 15 cities.

The protest ban in Dresden has provoked debate, with some such as Saxony's vice minister-president Martin Dulig defending the prohibition as the “right and responsible decision”, and others such as Left Party head Gregor Gysi saying it was tantamount to allowing fundamental rights to be taken away as a result of “individual threats”.

SEE ALSO: The rise and spread of Pegida