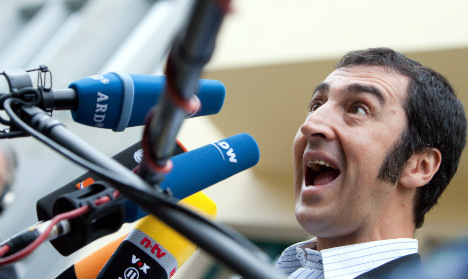 Party co-leader Cem Ozdemir, 49, joined thousands worldwide when in August he doused himself in freezing water to raise awareness of the neurodegenerative Lou Gehrig's disease or ALS.

As part of their investigation into suspected cannabis cultivation, Berlin prosecutors lifted the parliamentary immunity of Ozdemir, who performed the videotaped stunt on a Berlin balcony, the Bild am Sonntag newspaper said.

He later admitted that the hemp plant "wasn't standing there by accident", saying that with the YouTube clip he had wanted to add "a gentle political statement" to decriminalize marijuana.

German judicial sources were also quoted as telling the Sunday newspaper that the investigation would likely soon be dropped as the breach of narcotics laws was deemed trivial.

Ozdemir told the newspaper the investigation showed the "absurdity of German drugs policy".

And he told another newspaper, the Welt am Sonntag, that while drug use should not be trivialized, "the fact that in Germany we still criminalize cannabis but use different standards for alcohol defies reason and rationality".