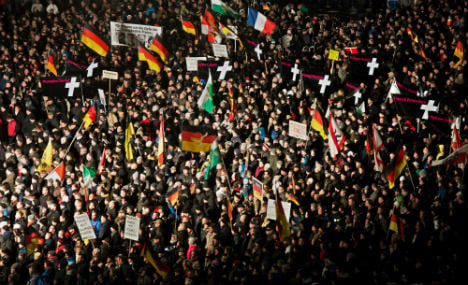 The average Pegida marcher is surprisingly average. He’s 48, lives in Saxony, is educated and has a slightly higher than average income for the state of Saxony. He claims no political party affiliation and doesn’t belong to a church.

That’s according to the Technical University in Dresden, who on Wednesday released the first empirical survey on who is Pegida.

And every Monday, he turns up with thousands of others to chant “We are the people” or “Wir sind das Volk” in protest against what he believes is ruining Germany.

Pegida or the Patriots Against the Islamisation of the West is not just an evolution of the Hooligans against Salifists demonstrations that turned violent in Cologne in October. Nor is it an arm of the neo-nationalistic party, the National Democratic Party.

It is far too smart to get lumped in with those massively unpopular groups.

What began as a group on social media emerged from the virtual to the real world starting in early 2014.

On January 12th, 2015, the latest "evening walk" in Dresden attracted 25,000 participants in the wake of the killing of 12 staff at French satirical magazine Charlie Hebdo at the hands of three Muslim men.

“I’m here because I think that, in Germany, we have a nice culture with tradition and history, and I worry that in the future, we will lose some of those things to the migrants bringing in their other beliefs and not wanting to conform to the beliefs that we have made our society on,” said one Pegida marcher who didn’t want to be named. He had driven all the way from Stuttgart to attend his first walk.

His sentiment is one that is shared by the Pegida founders.

"It is not really about the number of foreigners. The point is that with an increasing proportion of Muslims — and of those, it is actually a minority — more demands are being made on (German) society. We are always having to give in to these demands,” organiser Kathrin Oertel said in an interview with blu-News that was published on January 11th.

Germany has Europe's largest Muslim population, though they only make up five percent of the population. In respose to Pegida, Chancellor Angela Merkel has said "Islam is a part of Germany".

However, broadcaster ZDF published a poll on Friday showing that only 48 percent of respondents agreed with her statement.

Many people at Monday’s rally shared concerns about Germany’s vulnerability. Many felt the attack on Charlie Hebdo’s editorial staff was an attack on freedom of expression and the press.

They worry people will feel that their freedoms are diminished by Islamic extremists who cannot adhere to those western values.

It also explains why some carry signs saying “I like pork”. They worry that with more Muslims entering schools and work forces, pork will get taken off canteen menus. “It is a change of European cultural patterns to follow more religious ones,” TU professor Dr. Werner J. Patzelt told The Local.

Those calls to stop are evidence of how Pegida has grown. Once a fringe movement, they are now being shouted down by the surviving family of Charlie Hebdo staff members, who reject the use of tragedy for Pegida's cause.

“Pegida demonstrators reacted to these demands by saying we do not use or fuctionalize these tragedies, we only say this has happened because Islamization has been going on in France,” Patzelt said.

The traditionally reserved Chancellor even called them out in her New Year’s Day address, saying “Do not follow people who organise these rallies, for their hearts are cold and often full of prejudice and even hate.”

Pegida started when a few hundred people who knew one another joined a Facebook page started by Lutz Bachmann, the owner of a public relations firm in the former East German city of Dresden in Saxony.

The group was launched following a growth of feeling against the Kurdistan’s Worker’s Party (PKK), which is classified as a terrorist group by NATO states.

Bachmann has avoided the press since his criminal history, which includes drug charges that he fled to South Africa to escape, came to light.

Pegida has a 19-point manifesto that was released in December 2014. Besides calling for stricter immigration and asylum laws as well as making integration part of the constitution, it also calls for the outright rejection of any immigrant, refugee or asylum seeker with a criminal background.

According to the TU survey, most Pegida protesters find solidarity with the other 19 points. They feel that their conservative leanings are being ignored by the current political leadership.

“In Germany, we have a shift of the political discourse to the left compared with the distribution of political opinions among the population and for a long while, it has been not impossible but quite difficult to express so-called right-wing political sentiments in public,” said Patzelt.

The movement is also deeply pro-Russian. Patzelt points out that, to former East Germans, the current Russian regime has nothing in common with the Soviet Union.

“The people in the East hated the Soviets but for historical reasons, there is no anger against Russians among Germans,” he says.

Many of those who participate in the walk carry Russian flags. The idea is that if Russia has power again, it can create a balance of power with the United States of America, thus causing fewer bombing campaigns by the global military power.

With fewer military actions, there would be fewer wars, less demand for arms, and fewer refugees fleeing their homelands and coming to Germany, explains Patzelt.

“There is still a deeply-rooted anti-Americanism in East Germany and Dresden,” Patzelt explains.

To the right, but not extreme

While it is often called a group of far-right thugs and hooligans, Bachmann and his people have always been careful to stay away from that association.

“One could say, we are open, conservative, meritocratic, and liberal,” Oertel said in her blu-News interview of the group’s political leanings, adding that no one from their organisational team votes for the National Democratic Party, the neo-nationalist party in Germany.

And while The Local talked to several people partaking in the most recent demonstration who spouted neo-Nazi rhetoric, they are not who Pegida wants to be, says Patzelt.

"As soon as right-wing extremists become numerous among the demonstrators it will lose its credibility," he said.

In fact, the only connection they openly make with Nazis is their favourite word, the “Lügenpresse", which roughly translates to the lying press. Pegida wants journalists to write more about the problems of immigration and what it will really cost German society in the future.  The term was often used by the Nazis as a way to delegitimize left-leaning press.

Oertel and co-organiser, René Jahn, who was also interviewed by Blu-news, said that their members have traditionally voted for Angela Merkel’s Christian Democratic Party or the ailing liberal Free Democratic Party (FDP).

In the most recent election, many voted for euro-sceptic upstart, the Alternative for Germany (AfD).

And it is with Pegida that the AfD is emerging as more than an economic party. Indeed, several party ideas overlap withe Pegida's 19-point manifesto.

Detlev Cornelius, a business and economics analyst from the AfD group on the Dresden city council, told The Local that the political response has been wrong to the movement.

“Pegida has grown so big so fast that their support has been underestimated by all levels of government,” Cornelius said.

Though Oertel said they won’t be getting political yet.

“The AfD was simply the first party that reached out to us,” she said in her blu-News interview.

And Pegida's voice may be getting through to other parties as well.

Even Merkel has softened her stance on the marchers, telling the Frankfurter Allgemeine Zeitung in an interview published on Thursday "I understand many of the problems that occupy many people, such as the undeniable questions raised by immigration, which is otherwise beneficial and indispensable for our country, or about crime in the cities and in certain border areas".

However, she also reiterated that the organisers were motivated with "prejudice, coldness, even hatred" in the same interview.

“As a Dresden politician, I have to hear what they are saying. I may not agree with it, but simply putting out counter-organizations isn’t the answer. We have to get to real work to truly quash the movement,” said Jan Donhauser, head of the CDU fraktion in the Dresden civic government.

This outreach is what Patzelt recommends.

“The Pegida movement in Dresden does not consist of right-wing extremists, haters of Islam and so on, and so the therapy suggested by Chancellor Merkel was counter-productive.

"The very demand of Chancellor Merkel that people not join Pegida has created more solidarity with the movement,” she said.

In other words, Merkel’s call to combat intolerance only comes off as intolerance itself to Pegida followers.

And that solidarity isn’t just being found in Dresden. While Pegida movements outside of Dresden have been out-shouted by no-Pegida demonstrators, others keep appearing. Oslo has already hosted a Pegida march. Danes will hold one this coming Monday.

As its founders, who are notoriously suspicious of the press, bade farewell to the thousands gathered at the Lingnerallee skatepark in Dresden, where they usually congregate, they recognised the names of Pegida offshoots sprouting up around Europe and welcoming them with a roll call: France, Denmark, Spain, Austria, the United Kingdom, Sweden, Norway, Finland, Italy and many more.

"Tonight, in Dresden, we showed them how it’s done!” yelled Jahn into the cheering crowds.