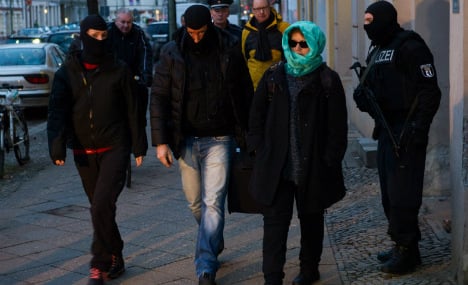 A special operations commander takes the arrested man to a waiting vehicle in Berlin. Photo: DPA

According to police and Berlin state prosecutors, the two men, aged 41 and 43, had pledged allegiance to terrorist political group Islamic State (Isis) and were planning a massive attack on Syrian soil.

Police also said there was no evidence of the group planning an attack on German targets.

Ismet D., 41, had declared himself as the Emir – or general – of an Islamic group in Berlin. There members were of Turkish, Russian, Czech and Dagestani origins. Police said Ismet D. carried out lessons in Islam that radicalized the group and convinced them to partake in jihadi attacks against "non-believers" in Syria.

The 42-year-old Emin F. was arrested for being the financier of the group's plans.

Three other men are being held in suspicion of having a participatory role in the planned attacks.

Around 250 officers and three Special Operations commands carried out the raids on 11 homes that were mostly located in the Moabit and Wedding regions.