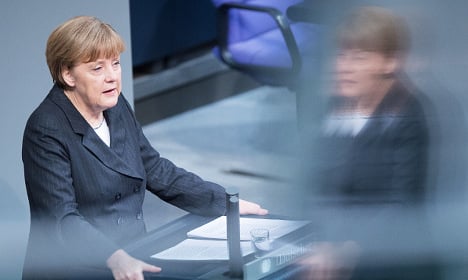 "Hate preachers, violent delinquents who act in the name of Islam, those behind them, and the intellectual arsonists of international terrorism will be rigorously fought with all legal means at the disposal of the state," she said.

After moving to tighten a travel ban for suspected jihadists, her cabinet would soon stiffen penalties for financing terrorism, she said.

Merkel was addressing the German parliament after a minute's silence for the victims of the three days of violence that shocked France last week, with religious leaders and the French ambassador in the chamber.

"We are shocked and stunned by the deaths of 17 innocent people," she told the Bundestag, eight days after the shootings at the Charlie Hebdo satirical weekly, vowing that Germany and France "stand together in these difficult days".

Pointing to the twin menace of Islamist militancy and anti-Semitism behind the bloody attacks, she urged the German people not to be divided by the "sick logic" of the killers.

Merkel warned against a backlash against Muslims in view of the three-month-old populist street movement "Patriotic Europeans Against the Islamization of the Occident", or Pegida, which drew a record 25,000 marchers on Monday evening.

She reiterated that both Judaism and Islam are "part of Germany" and pledged that expressions of anti-Semitism and attacks on mosques would be equally rigorously prosecuted, as "discrimination and marginalization have no place" in Germany.

"Any marginalization of Muslims, any general suspicion is unacceptable," she said, promising that "as chancellor I place Muslims in Germany under my protection".

However, Merkel also challenged Islamic scholars to explain why so often violence is perpetrated in the name of their faith, saying this was a relevant question being asked by many people.

"They ask why they should believe the idea, repeated over and over again, that the murderers claiming to act in the name of Islam have nothing to do with Islam," the chancellor said.

"I explicitly say, these are justified questions… I believe a clarification of these questions by the Islamic clergy is important and urgently needed. It cannot be avoided any longer."

Among security measures, Merkel stressed the need for online surveillance and for intelligence cooperation with foreign services — controversial topics in Germany following the revelations by former US intelligence contractor Edward Snowden about the NSA's mass snooping activities.

While Merkel said there must be a "balance between freedom and security", she stressed that "there is also no doubt that the exchange of information across national borders is absolutely essential for our security".

At the EU level, she urged progress on plans to combat the illegal arms trade, to better monitor the bloc's outside borders and to exchange air passenger data.

Merkel also urged the European Commission to move forward with a new directive to compel telecoms to retain all phone, email and internet communication data for certain periods, after similar initiatives were struck down by German and European courts.

She said there was now broad consensus among German interior ministers at the federal and state levels that "we need minimum data retention periods", which she hoped to soon see adopted in German law.