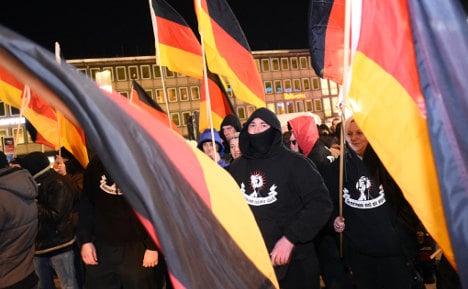 The Kölner Stadt-Anzeiger reported that around half of the participants in the "Kögida" offshoot of the main Pegida movement were violent football fans.

Participants in the "Hooligans Against Salafists" movement had called earlier in the week for members to travel to Cologne to protect the Kögida marchers, and police told the newspaper that they were "ready for anything".

In the event, large numbers of police officers kept the Kögida march through the area near the main station apart from 6,500 counter-demonstrators, and the evening passed off peacefully apart from "a few scuffles".

Navid Kermani, a Muslim writer of Iranian origin, was among the counter demonstrators marching under the motto "We are Charlie – for freedom and diversity". The terrorists "want to force us into a choice, between European and Arab, Western or Oriental, believers or infidels“, he said in a speech at the Nazi Documentation Centre.

"The answer must be: 'Not less, but more freedom! Not exclusion, but immediate equality! And above all: not opposition, but brotherhood!'"

Unlike during last week's Kögida march, the Cathedral and bridges over the Rhine remained illuminated.

Church administrators said that their extinguishing the lights on January 5th had been a "one-off signal" to show that they distanced themselves "from all tendencies that contradict our basic democratic order".

A sign with a declaration against all types of discrimination was erected on the side of the cathedral facing the main station.