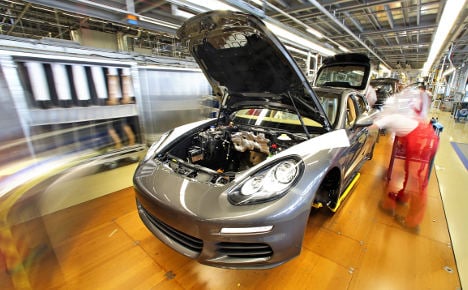 Work at the Porsche factory in Leipzig. Photo: DPA

According to a flash estimate by the federal statistics office Destatis, German gross domestic product (GDP) grew by 1.5 percent last year, beating the government's projection of 1.2 percent and a sharp improvement over the 0.1 percent growth seen in 2013.

The country's finances were also healthy, with the overall public budget showing a surplus equivalent to 0.4 percent of GDP, the statisticians said.

"On the whole, the German economy turned out to be stable … in 2014," they said in a statement.

GDP growth was "above the average of the last 10 years of 1.2 percent," they added.

"Obviously, the German economy turned out to be strong in a difficult global economic environment, benefiting especially from a strong domestic demand," Destatis chief Roderich Egeler told a news conference.

Following a dynamic start to the year and a subsequent period of weakness in the summer, "the economic situation had stabilized towards the end of 2014," Egeler said.

GDP expanded by "around a quarter of a percentage point" in the final three months of the year, said Destatis economist Norbert Raeth.

A more detailed estimate of fourth-quarter GDP data is scheduled to be released in mid-February.

Overall growth was driven by rising exports, increased consumer and public spending and a rebound in investment, the preliminary data showed.

And that could pave the way for increased momentum this year, the government said.

"At the end of last year, the economy returned to a modest recovery. And overall the signals point to a continued strengthening," the economy ministry said

Currently, the government is pencilling in growth of 1.3 percent, but now looks likely to upgrade its forecast.

Economy Minister Sigmar Gabriel is scheduled to reveal his updated projections at the end of the month.

ING DiBa economist Carsten Brzeski said that during the course of last year, the German economy had been hit by geopolitical conflicts.

"However, under the surface … the economic success story continued as unemployment remained low, employment reached a new record high and private consumption turned out to be an important growth driver," Brzeski said.

"After two years of near-stagnation, German GDP recorded a first sizeable increase as the economy shook off the confidence shock of the 2010-2012 euro crisis," he said.

The robust labour market "remains the key strength. As a result, consumption is increasingly becoming the key pillar of economic growth," he said.

And the country's strong fiscal position, the buoyant labour market, low inflation, the sharp drop in oil prices, the lower euro and the monetary easing by the European Central Bank "provide plenty of reasons to be optimistic," the expert continued.

"We expect the German economy to gradually pick up speed throughout 2015 and reach trend growth rates of around two percent annualized in the second half of the year," he concluded.

Commerzbank economist Jörg Krämer said the drop in oil prices and the euro's weakening against the dollar "are giving the German economy a considerable boost. We see upside risks for our 2015 growth forecast of 1.1 percent.

UniCredit economist Andreas Rees said he was sticking to his forecast of 1.4 percent in 2015 "with the first signs of acceleration already in the first quarter."

"The very presentable annual figure is no cause to sit back on our laurels," he said.

"Given the somewhat weak starting point at the start of the year, full-year growth is hardly likely to match last year's. We're pencilling in growth of just 1.0 percent," Bayer concluded.