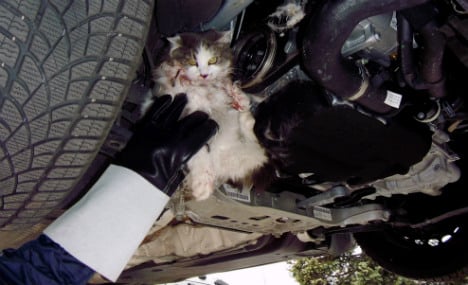 A mechanic with the German Automobile Club (ADAC) popped the hood of a member's car while carrying out a routine inspection after smoke came from the engine.

Instead of finding a mechanical failure, he found a cat stuck inside the motor.

The panic-stricken feline then had to be removed from the motor compartment by mechanics at the garage, coming out severely injured, the Munich Animal Rescue Association said.

After the rescue, the ADAC mechanics called Munich Animal Rescue, who in turn brought the mangled cat to the surgical veterinary office.

When contacted by The Local for an update on the kitty's condition, the clinic said they were unable to give out personal information on their patients for privacy reasons.

SEE ALSO: Is this expat cat the world's oldest?