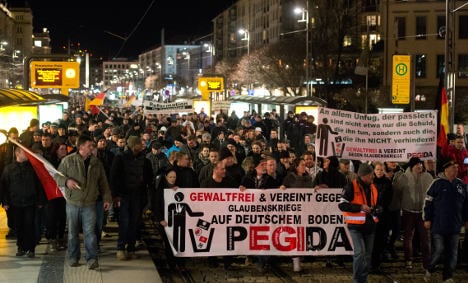 The front line of the Pegida march in Dresden on Monday. Photo: DPA

Police estimate 25,000 people took part in Monday's demonstration for Pegida, which stands for Patriotic Europeans Against the Islamization of the West.

Organizer Kathrin Oertel said she had "heard of 40,000 people" taking part. The last largest demonstration so far recorded had 18,000 participants.

"I sympathise with the people of France," one first-time Pegida protestor said. "I worry the same thing could happen here."

As protestors gathered at the Skatepark Lingnerallee in Dresden, organisers called for a moment of silence to honour "not only the victims of the Paris attack, but all victims of extremism everywhere."

Though Pegida's name invokes xenophobia, many protestors were there calling for more cooperation with Russia. The organisers also recognised the 35,000 people who marched in Dresden in a demonstration organised by the city's mayoral office. "They said they were 35,000 for tolerance. So are we."

A large police force was on hand to ensure the event remained peaceful. As the march began, Nopegida counter-demonstrators attempted to block Pegida's path, though police intervened and cleared the way for Pegida.

"As long as there is no outright racism and xenophobia, they have the right to march," Jan Donhauser, the head of the CDU fraction in Dresden told The Local earlier in the day.

"People see things on the news, on Syria, on Iraq, on Isis, and it's no wonder they are concerned if that's all they know," he said. Though there were members of the far-right scene there, much of the crowd walking through the cultural capital were concerned and curious citizens.

"I'm here for the first time tonight because I wanted to see what it's really about, whether the people who attend are really sort of normal people like my friends and I or if they are extremists, because I can understand some of Pegida's points," one participant who didn't want to be named told The Local.

He had driven 600 kilometres from Stuttgart on Monday to partake in the demonstrations.

As reports came in of 100,000 anti-Pegida demonstrators nationwide, Dresden's 7,000 were far out-numbered by those walking in support of Pegida.

Nopegida demonstrators held to the sidelines of the route.

"I don't want this to be our global image of the city," Richard Lorenz told The Local as he stood on the front line of the nopegida demonstration. "Islam does not pose a threat here in Dresden."

Ellen Rissinger, an American living in Dresden said that the counter demonstrators had to reclaim the city from Pegida. "We have to take a stand," she said. While no physical violence was reported, there was tension between the two demonstrations as frustrations flared.

"Hey Pegida, we've had enough! We're sick of you!" the protestors chanted.

The Pegida marchers volleyed insults in return, the most common of which was "get a job".

One Indian migrant, who wished to not be named, told The Local: "I don't understand what they are about. We migrants have done nothing wrong here in Germany, nothing to turn them against us."

The Local also found Hans-Holger Malcomeß, the office administrator for the city's Alternative for Germany (AfD) party in city hall, amongst those walking for Pegida.

"It's always a nice atmosphere here," he said, adding that this was his sixth time participating in Pegida's stroll as counter-demonstrators shouted in the background. "People with a common opinion get to express it here."

AfD has been divided over how closely to align itself with the Pegida movement, with mainstream politicians taking any chance to accuse the upstart anti-Euro party of xenophobia.

'See you next Monday'

As the march came back to its start point, organisers called out the names of Pegida-like demonstrations that have sprouted not only across German cities, but also across Europe.

"We will keep growing," called one founder from the stage.

Pegida demonstrators broke apart and called it an evening, leaving counter-demonstrators to take over the skate park that marks the start and end of Pegida's walk. Many danced with brooms, dusters or toilet brushes with live music and calls to clean up their city from the Pegida.

However, Pegida's organisers told their people as they left, "See you next Monday."