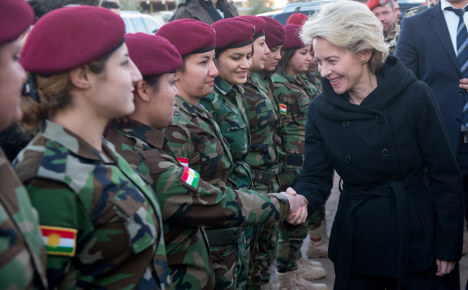 "I believe it's right to extend our support with great care", von der Leyen said.

"We know that the Peshmerga (Kurdish fighters) aren't just fighting for their own country, but for all of us."

Germany has already delivered enough weapons to arm 10,000 soldiers with a value of €70 million, including 16,000 rifles, 10,000 grendes, armoured vehicles and anti-tank rockets.

And 100 soldiers will be sent to the Kurdish capital Erbil to train the Peshmerga in the use of the weapons in the coming weeks. The deliveries and military deployment have been much debated in Germany, which traditionally has not sent weapons into conflict zones – with the exception of exports to Israel.

Kurdish representatives told von der Leyen that they need more anti-tank weapons, armoured vehicles and ammuniton to keep up the fight against Isis.

"We'll listen carefully to what they need", the Defence Minister said, adding that the government would have to agree on any new shipments.