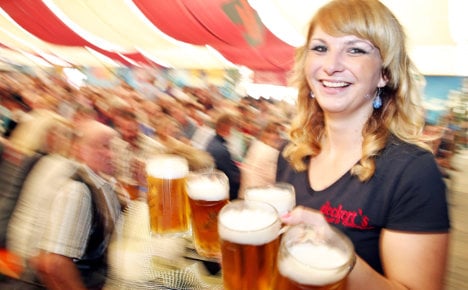 Germans drank on average 107 liters of beer per person in 2014, compared to 106.6 liters in 2013 after years of decline, the German Brewers Association reported Monday.

The brewers attribute the boost to nice weather, including a mild winter, and the World Cup, which saw Germany bring home the trophy from Brazil.

Germany has not seen an increase in beer consumption per capita since 2011, while the last time that annual beer sales rose was in 2006, when Germany hosted the World Cup.

Sales have slumped over the past 25 years and are down by about a third compared with the amounts recorded before reunification. Younger generations increasingly choose mixed drinks and spirits over a glass of beer.

Another factor in the increased sales is the growth in exports to the United States and China, where German beers are becoming increasingly popular. Alcohol-free beers have also grown in popularity.

Germany sold about 9.5 billion litres last year – more than Great Britain and Poland combined and number one in Europe – with the most popular being the German pilsner.
Eils said he expected there to be more diverse, regional and new kinds of beers in 2015.
"We are currently experiencing a renaissance of beer and a renaissance of brewing," he said.
"Old recipes and new beer styles enrich the already wide range of about 5,000 beer brands. Every day new beers are added and brewed with the highest quality, to the envy of the world."
SEE ALSO: Bavarian waiter breaks beer-carrying record