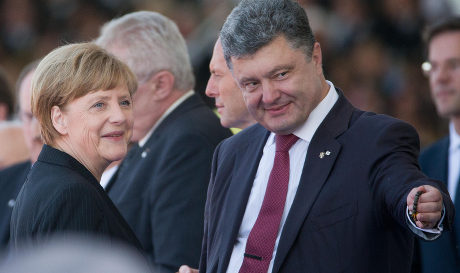 Merkel's office said she stressed that Poroshenko's attempt to convene a four-way leadership meeting in the Kazakh capital Astana on Thursday would succeed only if the warring sides committed themselves more to an existing truce.

"The chancellor expressed concern about the continuing tensions and the humanitarian situation in the east of Ukraine," German government spokesman Steffen Seibert said in a statement.

Merkel added that talks in Astana that would also include French President Francois Hollande should only go ahead only if they made "concrete progress". The four nations' foreign ministers will meet in Berlin on Monday to make what Poroshenko hopes are final preparations for Astana. But Merkel signalled to Poroshenko on Saturday that she thought such a meeting may be premature.

"A substantial coming together of positions on a ceasefire and the establishment of a demarcation line are needed," said Seibert. The German spokesman added that a more concrete decision on Astana could be made "after discussions planned in the coming days".

Putin and Poroshenko themselves have rarely spoken since agreeing to a September 5 truce that was meant to calm a pro-Russian mutiny in eastern
Ukraine in which more than 4,700 people have now lost their lives. That deal was followed by 1,300 more deaths and renewed independence claims
by Ukraine's two separatist provinces.

Yet both Merkel and Hollande — the main mediators in one of Europe's worst wars in decades — still view the tattered pact as the only viable way out of the crisis. The pro-Russian rebels have dismissed the meaning of any negotiations about the conflict that excluded their own their representatives.

Poroshenko's latest push for peace was quickly followed by an uptick in rebel attacks that had subsided with the onset of freezing and snowy weather across the devastated rustbelt of the ex-Soviet republic last month.

The Kremlin denies Ukrainian and Western charges of backing the rebellion in eastern Ukraine in order to extend its influence in the former Soviet republic after the ouster of a Moscow-backed president in February 2014.

A statement released by the Kremlin showed Putin appearing to distance himself from direct responsibility for bringing about an end to hostilities. The Kremlin said Putin told Merkel there was "no alternative and a vital need to establish direct political dialogue between Kiev and representatives" of the separatist east.

A Ukrainian foreign ministry spokesman said Saturday that the latest round of videoconference talks with separatist representatives on Friday "unfortunately… produced few results".

Poroshenko's office said the Ukrainian leader told Merkel about a "sharp escalation" of recent fighting and a "large increase of military equipment and modern weapons entering (the war zone) from the direction of the Russian border".

Neither the Kremlin nor the Ukrainian statements made any reference to the mooted Astana talks.