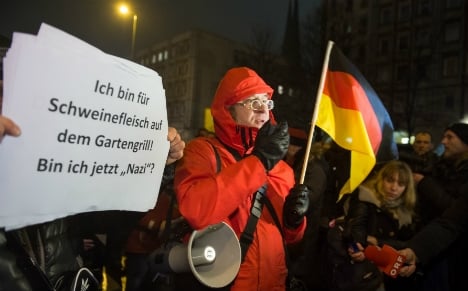 The leaders of the so-called "Patriotic Europeans Against the Islamisation of the Occident" have asked marchers to wear black armbands and observe a minute's silence for "the victims of terrorism in Paris".

LIVE COVERAGE ON THE LOCAL FRANCE OF PARIS ANTI-TERROR RALLY

Many observers of the rise of the far-right populist movement in the eastern city of Dresden now expect it to seek to make political capital from the massacre at the French satirical magazine Charlie Hebdo and its bloody aftermath.

Fears over the events probably "will buoy currents of the vague xenophobia that exist in this country", Everhard Holtmann of Halle-Wittenberg University told the Handelsblatt business daily.

Full coverage of the French terror attacks at The Local France

"The Islamophobia syndrome, on the crest of which PEGIDA rides, could in fact gain strength."

PEGIDA has voiced a wide range of grievances and railed against diverse enemies, not just Islam and asylum-seekers, but also the media and a political elite whom they accuse of diluting Germany's Christian-based culture with multi-culturalism.

Launched in October with a march of just 500 people, it has since swelled rapidly, stirring anguished debate in a country whose dark history makes expressions of xenophobia especially worrisome.

Chancellor Angela Merkel deplored the rise of PEGIDA in a New Year's address, saying its leaders have "prejudice, coldness, even hatred in their hearts".

Nonetheless, next Monday "it is likely that there will be even more people" than the record 18,000 who joined the latest rally, said Frank Richter, head of Dresden's civic education centre.

Victor Vincze, a senior city official on immigrants affairs, agreed that more people may be mobilised by the attacks on the Charlie Hebdo satirical magazine in France that claimed 12 lives and the subsequent deadly hostage sieges.

He told AFP that "there will be people who have stayed home so far and who will say: 'Look at what happened right in the heart of Europe, in Paris. This is not Baghdad or Sanaa. This will be emulated by others'".

Activists have announced plans for PEGIDA spin-offs in Austria and Scandinavia, while other European far-right groups have voiced support for the German movement.

Political scientist Werner Patzelt of Dresden Technical University predicted that "it is likely that the 20,000-mark for demonstrators will be reached Monday".

"The Paris attacks will without doubt affect Dresden and give the PEGIDA movement even more influence. PEGIDA simply says to everyone who claimed that their nightmarish vision had nothing to do with reality that they must now realise that this fear is not unjustified."

PEGIDA said on its Facebook page that the killings at Charlie Hebdo in Paris confirmed its views.

The movement has so far failed to strongly take root outside Dresden, in the former communist East Germany. Copycat gatherings of several hundred people each in western states have been vastly outnumbered by counter-demonstrations.

Nonetheless their rhetoric seems to strike a chord with many voters, according to a poll published by Zeit weekly. In a survey conducted several weeks ago, 57 percent said they felt threatened by Islam, four points higher than in 2012.

And 61 percent of non-Muslim Germans said Islam had no place in the West, according to the study released by the Bertelsmann Foundation think tank.

Germany, Europe's most populous country with 80 million people, is home to about four million Muslims, mostly of Turkish origin.

Several German Muslim groups have called for a silent march in Berlin on Monday to denounce violence and the risk of division of society.

President Joachim Gauck said this week the Paris attacks "have shaken us, but not our beliefs", stressing that his message was aimed at the perpetrators and their sympathisers, but also at "those who want to capitalise" on such tragedies.