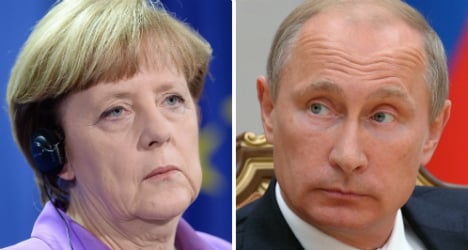 The announcements came with Europe — teetering on the brink of a new recession — thinking of scaling back steps that both failed to soften Russia's hard line on Ukraine and considerably damaged its own economy.


The threat of seeing Russia absolved saw Ukrainian Prime Minister Arseniy Yatsenyuk jet to Berlin to urge Merkel — seen as one of the West's savviest Kremlin handlers — to keep the pressure on Vladimir Putin at crisis talks next week.


Merkel made clear after hosting the 40-year-old Kiev cabinet leader that Moscow must meet every point of a truce it co-signed in September before gaining back access to EU capital markets it lost last year.


"I think we need to see the entire Minsk agreement implemented before we can say that sanctions will be lifted," said Merkel.


The Belarussian pact required Russia to withdraw troops from eastern Ukraine it denies having ever sent in the first place. The ceasefire was followed by 1,300 more deaths and never settled the rebels' separatist claim.


Ukrainian Defence Minister Stepan Poltorak estimated on Thursday that there were currently 7,500 Russian soldiers backing up the insurgent gunmen.


The nine-month separatist mutiny has now killed 4,700 people and left Ukraine – stripped of the Black Sea peninsula of Crimea by Russia in March – in danger of also losing its industrial heartland and resource base.


The new pro-Western leaders who helped topple a Putin-backed president in February must also deal with a looming debt default that could leave Ukraine bankrupt and cut off from foreign help.


An IMF inspection team that arrived in Kiev on Thursday fears Ukraine will only make it through the year with the help of an additional $15 billion-funds assigned on top of the $17.1 billion approved by the Fund in May.


Ukraine's allies have been hesitant to open their wallets for the second time in a year. They worry about their domestic financial problems as well as Kiev's propensity to squander assistance and abandoning economic restructuring plans.


But European Commission head Jean-Claude Juncker said on Thursday that the bloc would give Ukraine a further 1.8 billion euros ($2.1 billion) in medium-term loans to help Kiev meet "critical challenges".

The January 15 talks between Poroshenko and Putin in the Kazakh capital Astana will include both Merkel and French President Francois Hollande — the two main mediators in Europe's worst conflict since the Balkan wars of the 1990s.


Merkel held a string of discussions with Putin throughout the standoff that appear to have convinced her the Kremlin had no desire to drop its aggressive and diplomatically isolating approach to Ukraine.


But German Vice Chancellor Sigmar Gabriel warned in a newspaper interview this week that further economic reprisals against Russia could plunge the nuclear superpower into chaos and make life more dangerous for Europe.


"The goal was never to push Russia politically and economically into chaos," Gabriel told the Bild am Sonntag.


Gabriel heads the opposition Social Democratic Party that Merkel was forced into courting in order to form a government.


Berlin's political left has long harboured warmer relations with Moscow and been putting increasing political pressure on Merkel as the German economy slows.


Hollande for his part has been forced to delay the delivery of two warships to Russia that were built in France under a contract negotiated by then-president Nicolas Sarkozy.


The deal may end up forcing Paris to pay hundreds of millions of euros in damages and cost local construction jobs.


Hollande stressed on Monday that he was heading to Astana with firm resolve to make a breakthrough in the conflict.


Ukraine hopes the punitive steps — due to come up for review at the end of June — might still be extended because they require a unanimous vote from all 28 EU members to either lift or ease.

Jittery ex-Soviet satellites such as Poland have so far given no indication that they are ready to accept Putin's arguments.