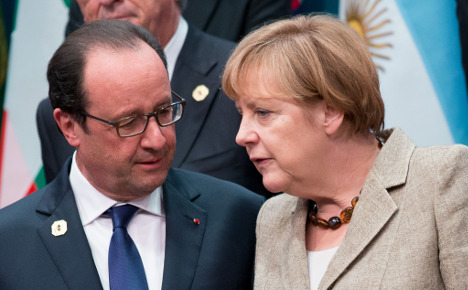 Merkel and Hollande at the November G20 meeting in Brisbane, Australia. Photo: DPA

"I think it is an important sign of Franco-German friendship that we stand side by side at a time like this," Merkel said. "I am impressed with how the
French people are standing together in the face of this barbaric attack."

Speaking at an event in the northern city of Hamburg, she also said that France and Germany share the same values and that "when these values are being threatened, we can say only one thing: we have to stand united."

Earlier on Friday, a spokesman for European Parliament president Martin Schulz said that a meeting between French President Francois Hollande and German Chancellor Angela Merkel planned to take place in Strasbourg on Sunday had been postponed.

Armin Machmer, the spokesman for Schulz who organised the meeting, said it has been delayed "because of the events" in France, where twin hostage dramas are playing out linked to the massacre Wednesday of 12 people at Charlie Hebdo satirical weekly.

See The Local France's coverage of the Paris attacks here.