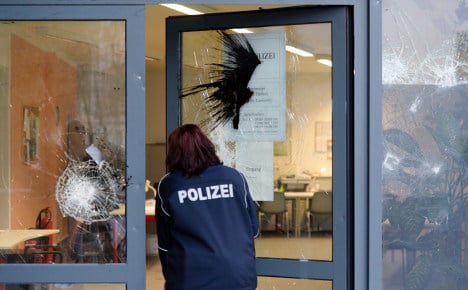 The entrance to the police station in the wake of the attack. Photo: DPA

Two officers inside the building in the Connewitz area were unhurt, but the attackers caused tens of thousands Euros' worth of damage with the fire attack and by throwing rocks, bottles and paint bombs against the security glass.

Police said on Thursday that the attack on Wednesday night lasted just 30 seconds before the group dispersed into the darkness.

One lead investigators are following is an anonymous claim of responsibility published online, which links the attack to the death of Sierra Leonian asylum seeker Oury Jalloh in police custody ten years ago on the 7th of January.

Jalloh was burned alive in a police cell in 2005, and it has never been established who was responsible.

"Cop, your tolerated status is rescinded", the authors wrote.

"You will be treated with the same lack of respect and violence by us as you use towards refugees."

Police are investigating the attackers for serious breach of the peace and have called for eyewitnesses to come forward.

"This violent excrescence against a social group is unacceptable. The state will do everything to bring the perpetrators to justice", Saxony's interior minister Markus Ulbig said on Thursday.