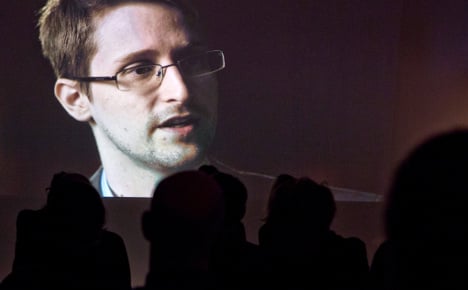 Edward Snowden on-screen at an advance showing of the NDR documentary in Hamburg. Photo: DPA

"The global war has long since broken out", reporters at Norddeutsche Rundfunk (NDR) say, arguing that a digital arms race has already begun.

NDR journalists interviewed former US National Security Agency (NSA) whistleblower Edward Snowden for the programme, which will also be broadcast in the US and Austria.

In it, the surveillance expert discusses the "black budget" of the American intelligence agencies, which is used to develop methods of attacking digital infrastructure, which Snowden argues could harm or even kill people.

They include the capability to cause power blackouts or penetrate the computer systems of hospitals and banks.

"If internet hubs are switched off, people will no longer be able to call the fire service or the police. If a hospital is attacked, life-sustaining machines could be switched off", he points out.

And the NSA is not the only spy agency developing its ability to compromise other countries' systems, with other governments close behind.

One IT expert confirms that "governmental organizations are making targeted attacks against our economy", while the NDR reporters also found out that Iran conducted an attack against the US banking system via German servers.

That could have been in response to the computer virus Stuxnet, which was used to damage centrifuges in an Iranian uranium-enrichment plant – made by German manufacturer Siemens – and for which the US remains the prime suspect.

"We assume that a few people, particularly in the USA, won't be happy that we're showing this film", NDR documentaries chief Dirk Neuhoff told DPA.

But the authors of the documentary, who received thousands of classified documents on a USB stick while researching their script, want to reveal information they believe is in the public interest.

"If you look away now, you're gambling with freedom", they said.

Snowden agrees, saying that "the Internet should support freedom and democracy, not be turned into a weapon" – although it may already be too late.