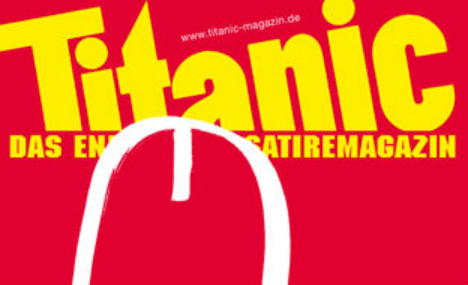 Titanic's featured homepage cartoon promises a study in comparative religion, illustrated with four phalluses – punning on the gag that "the pen is mightier than the sword."

The cover is a repost of the March 2006 cover depicting four major world religions, including Islam, as told by comparative phalluses.

"After the attack on the French satire magazine Charlie Hebdo, the Titanic editorial staff is reacting with solidarity (tsk tsk!) and steadfastness (We will continue to make jokes – right after our lunch break!)," their website stated.

"Terror alert: At 1600 a press conference will be held at Titanic that will be attended by RTL, Hessischer Rundfunk, Frankfurter Rundschau and other private and news agents. For terrorists this offers the possibility to not only take care of satirical press, but also the entire German press of lies. There will be sandwiches (afterward!)."

Like Charlie Hebdo, Titanic had previously printed cartoons depicting Muhammad, though not as frequently as their Parisian colleagues.

Wolff said he and his staff were "shocked" by the terrorist attack that claimed 12 lives, including those of France's best known satirists on Wednesday.

However, Wolff told FAZ that he personally did not feel threatened, even though two of the suspects, brothers Cherif Kouachi and Said Kouachi are still at large. There were reports that the fugitives were sighted in northern France late Thursday morning.

Titanic isn't the only German paper that responded with reprinting cartoons of days gone by. The Berliner Kurier's cover featured a cartoon by Austrian artist Marian Kamenski depicting a Muhammad illustration reading a Charlie Hebdo magazine in a bloodbath and printed more of the murdered cartoonist's work depicting Muhammad within its pages. Tagesspiegel and BZ also republished Charlie Hebdo Muslim cartoons.

Wolff told Meedia, which focuses on news of the German media, that Titanic has yet to decide how it will react in its future issues.

"We've received a lot of  solidarity and inquiries into our safety today. We can certainly, on a personal level, make fun of that. How we will address the issue will be decided in the next few days," he said.

A further shooting also took place in France as a man wearing a bullet proof vest opened fire on police officers at the scene of a traffic incident. One officer died and another was injured. The shooter was reportedly arrested.