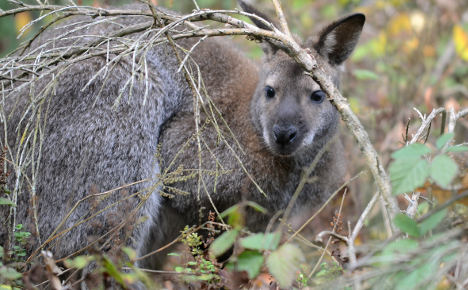 A Bennett kangaroo hiding in the woods. Photo: DPA

After the marsupial, now identified as a female named “Zippe”, was spotted on an industrial site in Groß Kreutz, Brandenburg, on Sunday, its owners came to the area and were shown a shelter that local animal rights activists had discovered.

They laid a trail of food from the shelter leading back to the site on Tuesday evening in the hope that the kangaroo would be lured back, the Potsdamer Neueste Nachrichten reported.

Just a few hours later she appeared and the owners put fences up to secure it so that they could pick it up on Wednesday morning.

But when they returned, they found her dead.

Local civil protection (Ordnungsamt) officers in nearby Werder learned that Zippe was no longer of this Earth on Thursday morning.

They had taken part in the search along with police after the animal escaped in November, but on Monday announced that they would stop helping to track the creature.

The kangaroo escaped in late November after jumping over an electric fence and a hedgerow at the small private zoo in Derwitz where it was kept.

She dodged police, Ordnungsamt officers and passing motorists who attempted to corral it – at one point boxing her way out of a net – before the authorities officially gave up the chase last weekend.

Bennett kangaroos, which are mostly active at night, can run at 50 km/h and can leap 12 metres forwards in a single bound, making her facility with escaping unsurprising.

Vets had suggested that Zippe would be able to survive the winter in Brandenburg, as kangaroos can handle low temperatures.

It was suggested on Thursday that the animal might have died of stress due to the unknown environment and the road traffic close to its shelter.

SEE ALSO: Police give up on kangaroo hunt