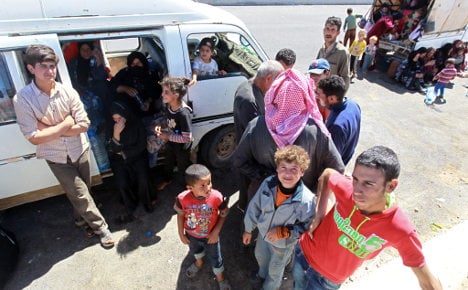 The Office of the United Nations High Commissioner for Refugees (UNHCR) said in a press conference in Geneva on Wednesday that there were a total of 56.7 million refugees worldwide by mid-2014.

Armed conflict in numerous countries has led to the increase in people fleeing their countries or displaced within their own borders, the refugee organization said in its half-year report.

“If the trends continue, Germany will likely have the highest number of asylum applications in 20 years for all of 2014”, they wrote.

Around a fifth of people seeking asylum in Germany were refugees from Syria, where a civil war is raging between the repressive government of Bashar al-Assad, rebel groups and fighters loyal to the Isis terrorist group.

Below Syria on the list came people from Serbia, Kosovo, Afghanistan and Eritrea.

Chancellor Angela Merkel used her New Year's Eve address to the nation to repudiate those in Germany who want fewer asylum seekers. “It goes without saying that we help them and take in people who seek refuge with us”, she said.

“Do not follow those who have called the rallies. Because all too often they have prejudice, coldness, even hatred in their hearts.”

UN relief workers are having great difficulty even reaching refugees in Lebanon, where there are no official refugee camps and recent days have seen heavy snowfall.

Other countries struggling to cope with the numbers included Turkey, Jordan, Ethiopia, Kenya and Chad.

The number of new asylum applications worldwide grew by 18 percent compared with the first half of 2013.

“As long as the international community fails to find political solutions for the continuing conflicts and to prevent new conflicts, we will have to deal with their dramatic humanitarian consequences”, UN High Commissioner for Refugees António Guterres said.