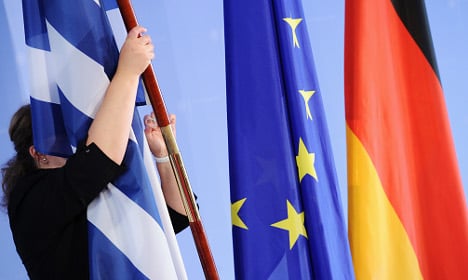 Bild newspaper said the chancellery in Berlin had run through scenarios for the event of an election victory in Greece's January 25th snap polls by the radical leftist Syriza party.
The party has pledged to reverse reforms imposed by Greece's international creditors and renegotiate its bailout deal.
Mass circulation Bild daily said that if Athens were to break off from its savings and reform course, an outstanding €10 billion ($12 billion) of aid to Greece could be halted.
"If it were to come to an exit by Greece from the euro, government experts fear a customer run on Greek banks to safeguard euro deposits. The consequence could be a bank collapse," Europe's most widely read newspaper said.
If that happened, Europe's banking union — or, as Bild said "in plain language, Europe's tax payers" — would possibly have to intervene, paying billions.
Germany's Der Spiegel news weekly on Saturday cited sources close to the German government as saying Chancellor Angela Merkel is prepared to let Greece leave the eurozone if Greeks elect a government that jettisons the country's current austerity course.
Berlin has not denied that report but has stressed that the government has not changed its position on Greece and its European policy.
But Merkel has come under fire since the Spiegel report, including from EU parliament president Martin Schulz, who in Wednesday's Die Welt accused her of "irresponsible speculation".